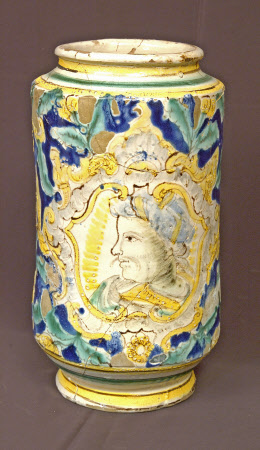 An albarello is a type of jar, originally designed for apothecaries, to hold medicinal ointments and dry drugs. The jars were sealed with parchment or leather tied with a piece of cord. The development of the albarello had its roots in the Middle East, however this type of maiolica example became popular in Italy and was produced from the first half of the 15th century.

Accepted by HM Government in lieu of inheritance tax and allocated to the National Trust for display at Bradley Manor, 2002.