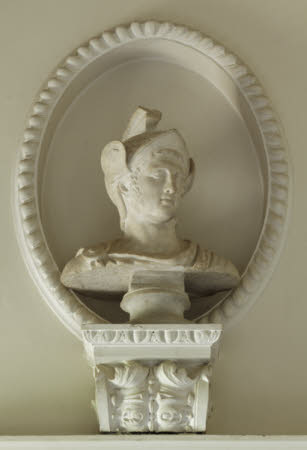 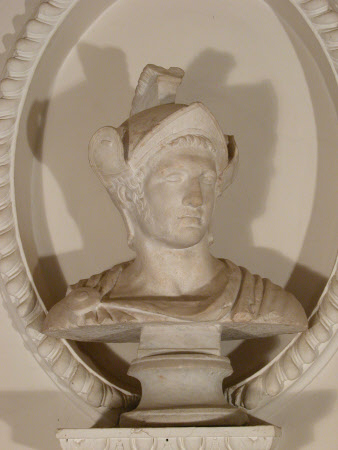 Marble, a helmeted soldier, c. 2nd century AD. A statue fragment of a young soldier wearing a helmet and cloak fastened on the proper right shoulder. Mounted on a later tabula and turned socle. The fragment has been cut down to a bust from a statue which was presumably in poor condition. It has been suggested that the figure might show the Roman general Scipio Africanus (236-183 BC) but there is no evidence to prove this. The tip of the nose, both earpieces, a portion of the uppermost fold of the cloak over the chest, and the left shoulder with a significant area at the back are restored. The crest of the helmet was restored, attached by a metal pin, but is now lost.

The face, hair and cloak are derived from the Hermes Richelieu type (Arachne, type 287). The Farnborough version, however, wears a decorated Attic helmet (i.e. a helmet from ancient Athens), which indicates that the 4th century BC model of the Hermes Richelieu appears to have been adapted by a sculptor of the 2nd century AD (Scholl 1995, pp.39-40). The sculpture collected by William Holbech (d.1771) is a mixture of antique and contemporary Roman work assembled on Grand Tour and via agents in Rome from around 1732 to 1745 . Holbech's collection is considered a forerunner of its type as most Grand Tour collections were assembled in the 1760s. The classical statuary comprised of busts, tondos and reliefs is installed in purpose-built niches at Farnborough Hall, a former medieval manor house which Holbech remodeled in the style of a Palladian villa. Alice Rylance-Watson December 2018