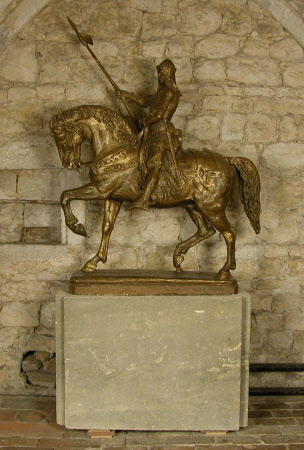 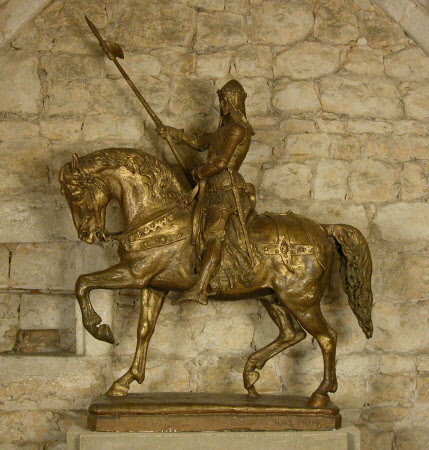 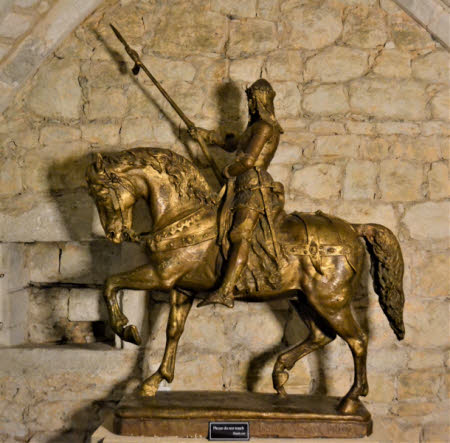 Gold-painted plaster model of equestrian statue of Edward, Prince of Wales, ‘The Black Prince’ (1330–1375), by Edouard Lantéri (1848-1917). The prince is depicted helmeted and in full armour, sword by side and a lance with pennant in his right hand, mounted on his charger. Mounted on a stone base made from stone from the quarry at Corsham in Wiltshire, probably in the 1950s

This fine model may be associated with an abortive and somewhat haphazardly-managed plan by the Corporation of London to commission statuary, to be placed on the four pedestals of the newly-built Blackfriars Bridge in the City of London. The competition was announced in the autumn of 1880 and a large number of submissions received. Although nothing was selected for formal commission, premiums were awarded to several sculptors, including Lanteri for a model of Queen Elizabeth. After much confusion and prevarication over the next two years, it was decided in the spring of 1883 that equestrian figures would be more appropriate for the setting; in January 1884 six sculptors including Lanteri were approached concerning possible commissions, but more sculptors put forward their own proposals. Seven models were eventually received, but these did not include Lanteri’s model; four went through for final consideration, including Richard Coeur de Lion by Lanteri’s then employer Joseph Edgar Boehm. In October 1886 the competition was precipitously abandoned and an announcement made that lamp standards would instead be installed on the pedestals on Blackfriars Bridge (Susan Beattie, The New Sculpture, New Haven/London 1983, pp. 41-43). Hamo Thornycroft’s model for Edward I survives in the Victoria & Albert Museum (Diane Bilbey and Marjorie Trusted, British Sculpture 1470 to 2000. A Concise Catalogue of the Collection at the Victoria and Albert Museum, London 2002, pp. 417-18, no. 687). The sculpture was probably acquired by Charles Henry Robinson around the time or shortly after he had bought Ightham Mote; it may be seen, on its present stone base, in a photograph of the Great Hall in a guidebook to the house published probably in the 1950s. Jeremy Warren (2017)

Acquired by Charles Henry Robinson by the early 1950s.

Inscribed along front edge of plaster base: EDWARD THE BLACK PRINCE Inscribed on surface of base, to right of left hindleg: ED. LANTERI/SC.