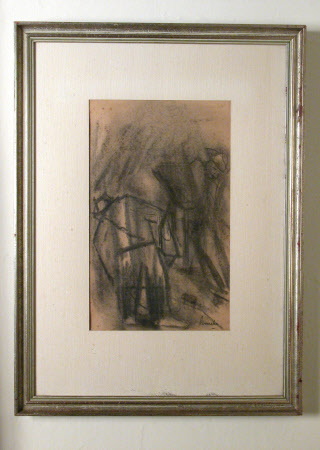 Charcoal on paper glazed in a giltwood frame

Charcoal on sand coloured paper, The Harvest by Constant Permeke (1886-1952). Late 1930s. A study of two male figures, wearing hats, who appear to be digging. From 1930, Permeke turned to painting peasant scenes and landscapes of his native countryside around Ostend. The rugged construction of these figures is an expressive representation of the slow movement of the countryside but also reflects the vitality of ordinary people at everyday toil. Permeke leaves out any trivial detail and gives us only the essential and the powerful. This artist was regarded as a Flemish Expressionist, but his style remained largely his own.