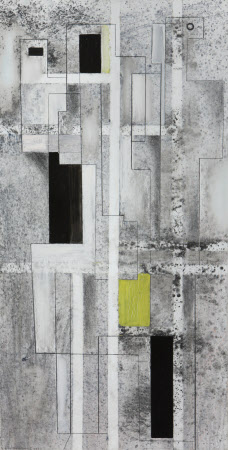 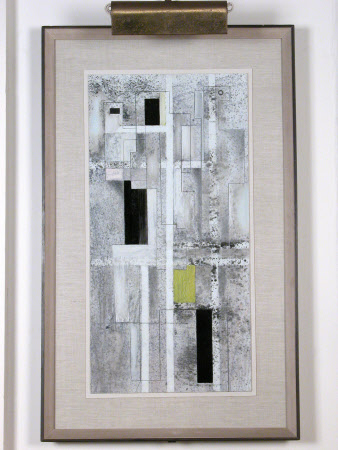 The title of this work connects with Hepworth’s interest in Greek-related subjects following her visit to Greece in 1954. It shows tightly controlled interlocking figures and a technique of intersecting lines which relate to Cubism. 'Delphic Figures’ depicts a fusion of bodies, possibly in a family group. The family theme was an emotive one for Hepworth, particularly around the time of the collapse of her marriage to Ben Nicholson in 1950, followed by the death of her son in an air crash in 1953.

Oil painting with pencil and gouache fabric and fibreboard, Delphic Figures by Barbara Hepworth (Wakefield 1903 – St Ives 1975), 1956. A typical example of Hepworth's interest in Greco-Roman styles. Another piece by Barabara Hepworth, the bronze scuplture entitled 'Two Forms' from 1967, is also part of the collection at Dudmaston (National Trust Inventory Number 814369). A third piece by Hepworth, 'Surgical Operation', a pen and ink drawing (circa 1946 - 1949) is part of the collection at Mottisfont Abbey in Hampshire (National Trust Inventory Number 769730) and was on loan to an exhibition being held at The Pallant House Gallery in Chichester, West Sussex, 2013. Barbara Hepworth was married for a time to the artist Ben Nicholson whose work is also contained in the collection at Dudmaston (see National Trust inventory numbers 814222, 813622 and 814223). From 1939 onwards, Hepworth lived in the artistic hub of St. Ives in Cornwall, dying there in 1975 following an accidental fire in her studio.