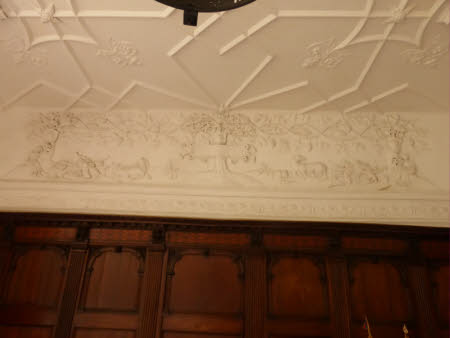 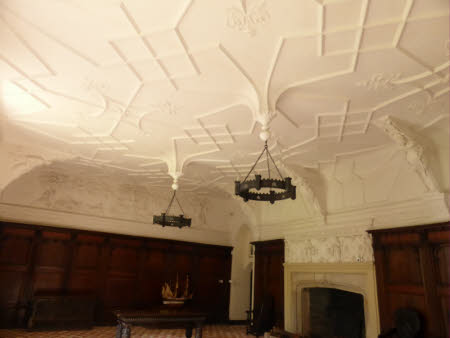 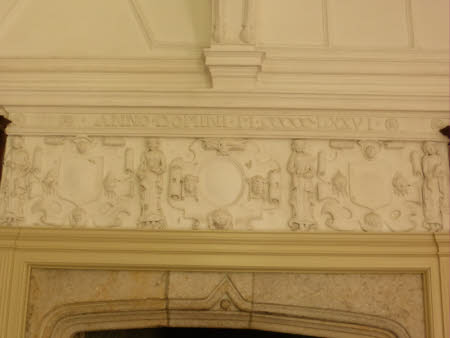 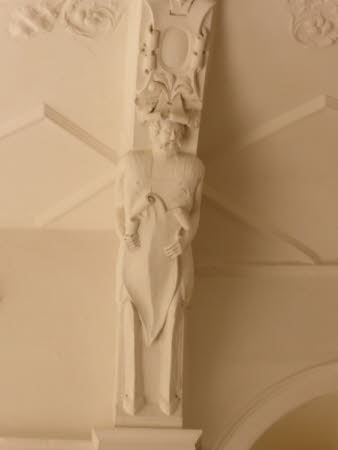 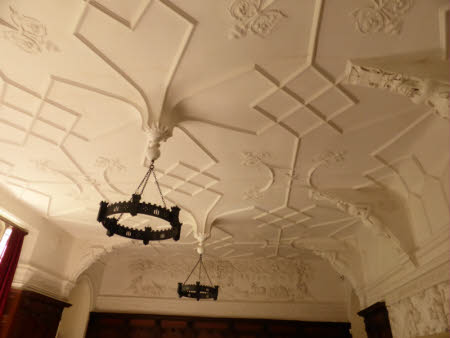 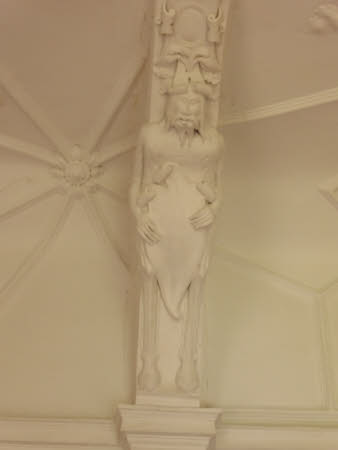 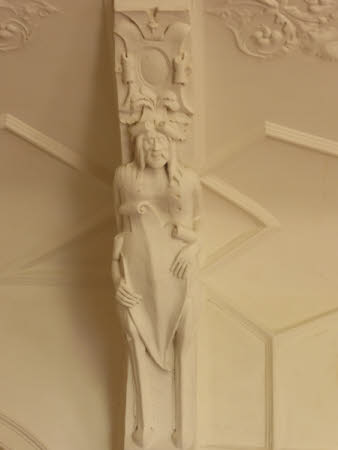 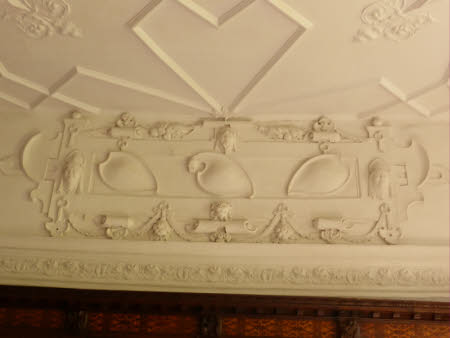 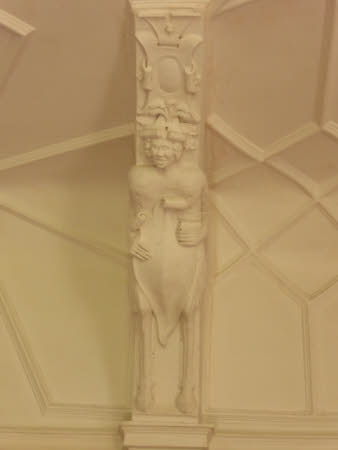 Decorative plasterwork in the Great Hall, comprising a ceiling, an overmantel, corbels and friezes on the north, south and east walls. In 1938 the plasterwork survived a fire that destroyed other sections of the Abbey. The ceiling is supported on a substructure of joists running east-west and beams running north-south. It has a smooth surface decorated with a geometrical design of narrow ribs, forming interlocking squares and concave-sided lozenges, with ribs radiating from four-leaved bosses and terminating in foliate motifs within the panels. At other rib intersections, the ceiling tapers down to two turned, ball pendants that hang from the centre of the ceiling, each terminating in foliation, from which hang (modern) black iron castellated chandeliers (see NT809622). On the north and south side of the Great Hall are four moulded plaster corbels, which are presumed to conceal ceiling trusses. Upon each corbel is a hooved figure, said to be a satyr, representing one of the four continents: Europe, America, Africa and Asia. The figures are curved against the bodies of the corbels and stand on moulded pedestals. On either side of each corbel is a foliate motif. Surmounting the wooden panelling and overmantel is a continuous narrow moulded plaster frieze with repeating scrollwork, between a moulded cornice and an architrave. Above the narrow moulded frieze on the north and south walls are large, relatively plain friezes. The frieze on the north curves down to the cornice of the narrow moulded frieze and is decorated with interlocking ribs in a geometrical design, continuous with those on the ceiling. There are three foliate motifs on the frieze on the south wall between the windows. A frieze with an intricate strapwork cartouche sits above the narrow moulded frieze on the east wall. In addition to the cartouche, there are festoons, grotesques and depictions of helmeted heads. The cartouche supports three plain shields. On the north wall, an elaborately moulded overmantel sits above the granite fireplace and its wooden surround, below the narrow moulded frieze. It is divided into three compartments that are decorated with plain shields surmounted by human heads and grotesques. The shields are flanked by figures of Justice, Temperance, Fortitude and Learning (or Prudence). Justice is holding scales, Temperance is diluting wine with water, a snake entwines Fortitude and Prudence is holding a book. The narrow frieze above is inscribed ‘.ANNO.DOMINI.M.CCCCC.LXXVI.’ (1576.) Although it is difficult to determine the various repair phases, conservators believe that the ceiling has been extensively consolidated and re-plastered. The original base coat plaster is believed to have been a soft lime earthen or earth rich plaster reinforced with animal hair; however, this is only found on the pendants. Two types of gypsum-based plaster were used for re-plastering: one not reinforced, and one reinforced with animal hair and vermiculite aggregate.