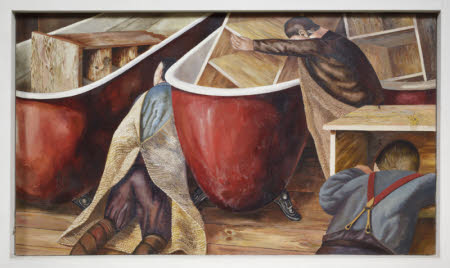 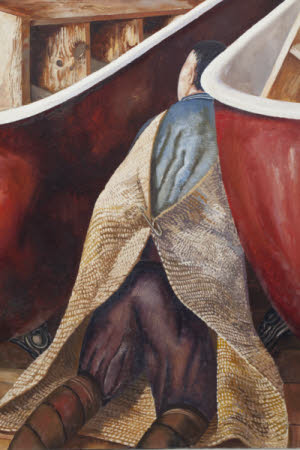 This ritual of scrubbing bedside lockers at the Beaufort Hospital took place in the bathroom of Ward 4. This duty was often overseen by the fearsome Sister Hunter, who once caught Stanley’s brother, Gilbert, cleaning the floor with a mop instead of a scrubbing brush. ‘There are no corners to Spencer’s Ward’, she admonished. Spencer shows himself squeezing himself between the bath tubs, where he was able to find some all-too-elusive personal space. For him, this menial task – like scrubbing floors - assumed a spiritual quality.

Oil painting on canvas, Washing Lockers by Sir Stanley Spencer, CBE, RA (Cookham 1891– Cliveden 1959), 1929. A bathroom at Beaufort Hospital. The lockers were wooden shelving units that were used at the bedside of the patients to keep their possessions, and are depicted submerged in the magenta wash house baths with orderly’s cleaning them. Spencer, as seen here, used to hide himself between the baths in order to escape tiresome duties or simply to work alone undisturbed. Spencer wrote at the time of Sister Hunter, a strict ward sister who demanded he searched rigorously for dust both under and inside the lockers. An early version of this was included in ‘Scrubbing the Floor and Soldiers Washing, Beaufort Hospital’.