The Resurrection of the Soldiers 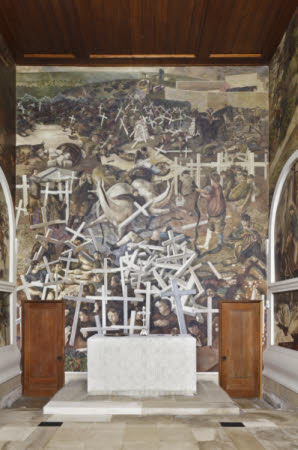 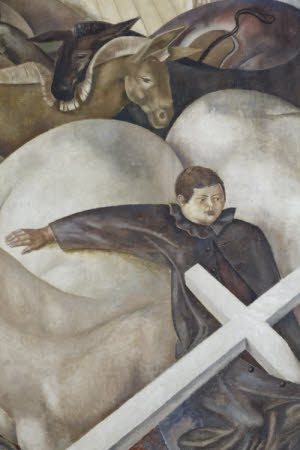 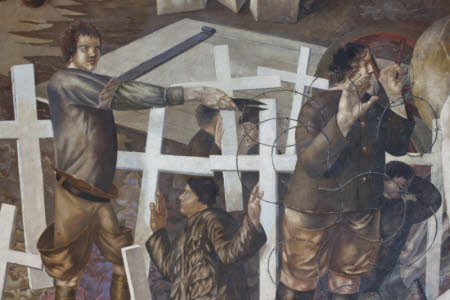 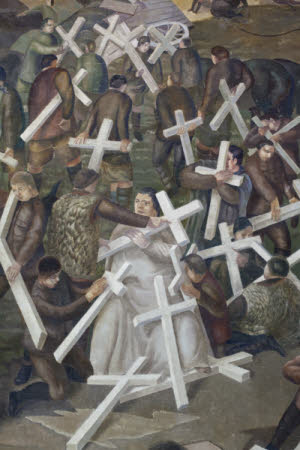 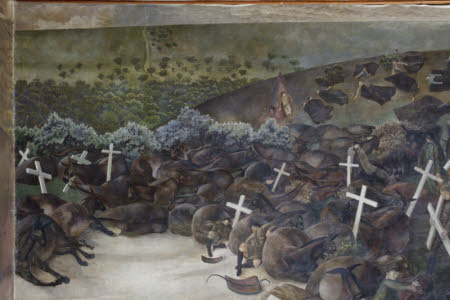 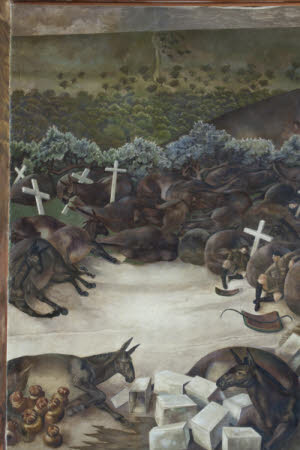 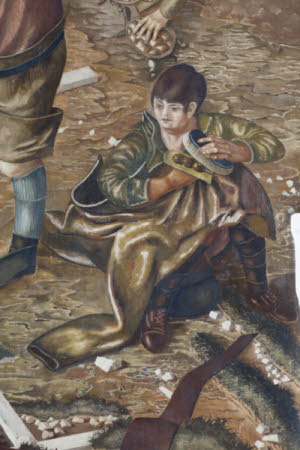 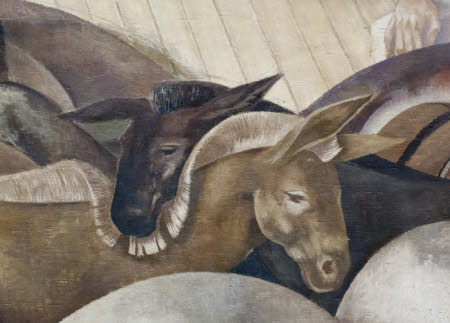 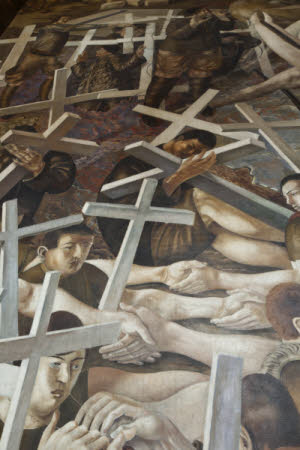 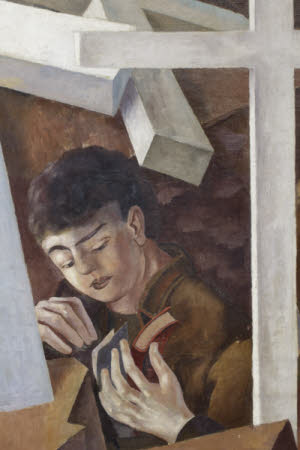 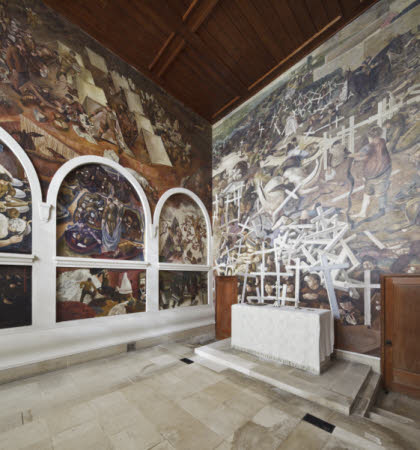 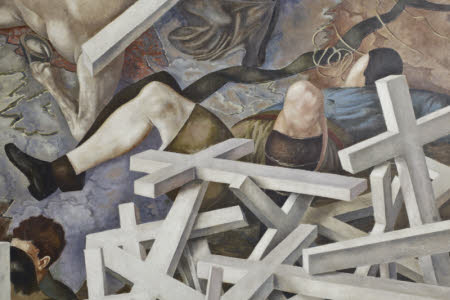 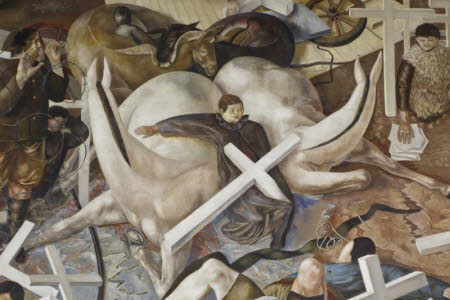 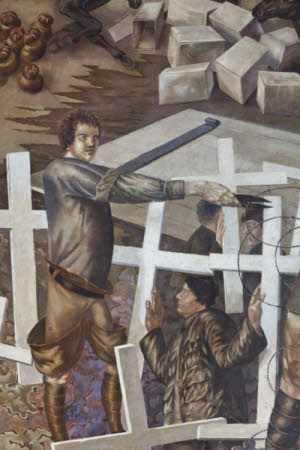 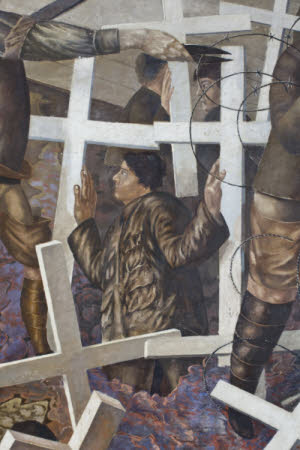 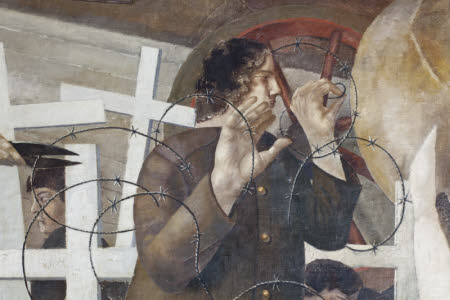 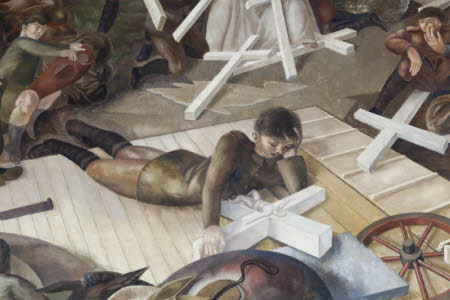 Stanley Spencer’s cycle of 19 paintings at Sandham Memorial Chapel depict vignettes of life from the First World War based on his experiences as a medical orderly. Spencer was inspired by Italian Renaissance painters and based his cycle on the Giotto’s frescoes in Padua. At the centre, in the place of an altarpiece, is Spencer's enormous ‘Resurrection of the Soldiers’. Together, with the two arched pictures on either side ('Dug Out' NT 790182 and 'Reveille' NT 790186), the Resurrection forms the central panel of a triptych. In Spencer’s modern day Resurrection, however, Christ is not the focus. Instead, dead soldiers rise from their graves, uprooting a muddle of white crosses. This is Spencer’s vision of the end of war, in which heaven has emerged from hell. Each cross amongst the astonishing and brave tumble across the canvas serves as an object of devotion (some of which are handed to Christ, who has been unconventionally placed in the mid-background); or marks a grave from which a soldier emerges; or serves to frame a bewildered face. The central motif is a pair of fallen mules, still harnessed to their timber wagon. The position of the cross on the altar in the chapel was of great importance to Spencer, for he felt it ‘imperative that the top of the altar should be slightly above the bottom of the big picture’ so that it might be incorporated visually amongst the mass of his own painted crosses.

Oil painting on canvas, The Resurrection of the Soldiers by Sir Stanley Spencer, CBE, RA (Cookham 1891– Cliveden 1959), 1928/9. This picture is a reminder of the relationship between war, death and Christianity. The 'Resurrection' took Spencer nearly a year to complete. It dominates the Chapel and all the other scenes are subordinate too it. The picture is a reminder of the relationship between war, death and Christianity, not merely a convenient and familiar religious image behind the altar. The composition is based on a complex pattern of wooden crosses which was suggested to Spencer by his habit of squaring up the canvas in order to work out the design. As a living soldier hands in his rifle at the end of service, so a dead soldier carries his cross to Christ, who is seen in the middle distance receiving these crosses. Spencer's idea was that the cross produces a different reaction in everybody. The centre of the picture is dominated by a collapsed wagon, which was based on Spencer's recollection of a dead Bulgarian mule team and ammunition limber. Mules left a deep impression on the artist and are a constant theme in the Macedonian pictures. Here the dead mules and their handler come back to life and turn towards the figure of Christ. On the waggon boards lies a young soldier intently studying his cross and the figure of Christ represented on it. The foreground is influenced by the altar and intended to form a subject in itself - 'a sort of portrait gallery formed by soldiers coming out of the ground and the crosses arranged so as to look like frames'. The soldiers are emerging from their graves behind the altar, shaking hands with their resurrected comrades, cleaning buttons and winding puttees. ,