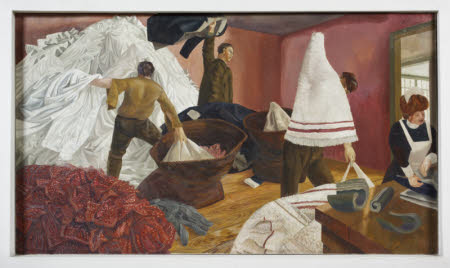 The Laundry at Beaufort was a space where Spencer found respite from unwelcome chores. In this cheerful scene a nurse supervises orderlies who sort through bags of laundry, including towels, jackets and sheets. A giant pile of white sheets builds up against the wall – a second pile, of spotted red handkerchiefs belonging to the permanent inmates from the asylum at Beaufort, reminds the viewer of the hospital’s dual purpose during the war.

Oil painting on canvas, Sorting the Laundry by Sir Stanley Spencer, CBE, RA (Cookham 1891– Cliveden 1959), 1927/32. This is another domestic scene, much more cheerful than some of the preceding ones. The supervisor this time is a nurse in a clean, crisp uniform rather than a bullying NCO, and the happier spirit is reflected in the bustle of activity. The spotted hankerchiefs belonged to inmates of Beaufort which was a lunatic asylum taken over by the military.