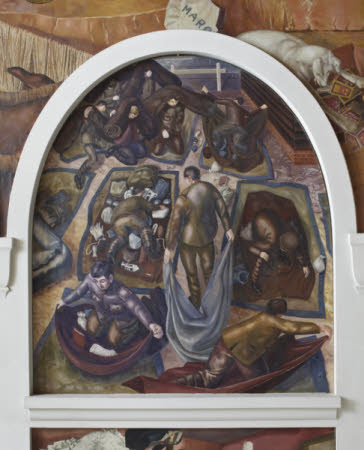 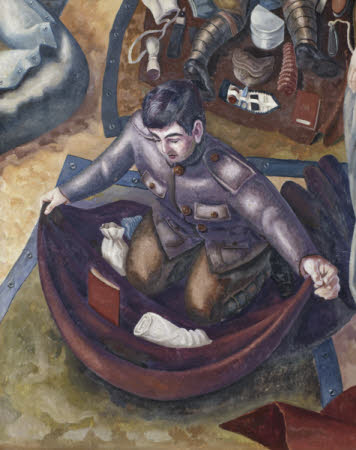 Soldiers struggle to flatten out the blankets onto which their kit is to be laid out prior to inspection. A humorous touch is provided by the one soldier who is near to completing his task, who appears awkwardly sprawled out as if he has fallen asleep on top of his kit. Kit Inspection is the only one of the chapel canvases to be set at Tweseldown, the camp near Farnham in Surrey where Spencer was sent to train before he left for the Macedonian front.

Oil painting on canvas, Kit Inspection by Sir Stanley Spencer, CBE, RA (Cookham 1891– Cliveden 1959), 1930. To an untidy, materialistic man like Spencer, a kit inspection must have undoubtedly been an irksome business, but on a different plane he was undoubtedly fascinated by the idea of soldiers surrounded by their own little world of trite everyday objects. The scene is the only painting set at Tweseldown Camp, near Farnham in Surrey where Spencer was sent from the Beaufort War Hospiatl for basic training before leaving for Macedonia. This space in the Chapel was originally intended to hold a scene of an operating theatre (as illustrated in the 1923 working drawings) which Spencer finally rejected as being too disturbing and because it did not fit in with his general theme of companionship.