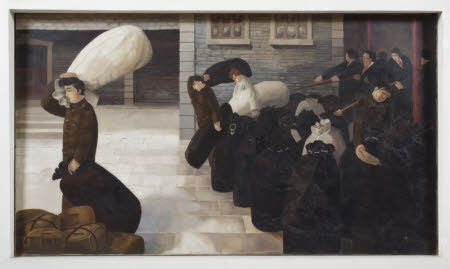 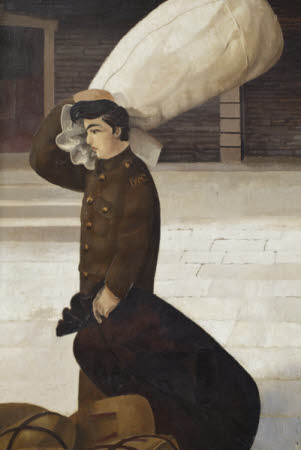 Orderlies sort the kit-bags belonging to a newly arrived convoy of soldiers in a bleak courtyard, a part of the Beaufort Hospital that, in essence, survives to the present day. Spencer wrote about the scene, remembering that ‘Immediately on arrival at the hospital the kit-bags of the soldiers just arrived would be stacked all together in the courtyard… The orderlies would then carry them to wherever the patient wanted then, or open them if so required. They were all padlocked’.

Oil painting on canvas, Sorting and Moving Kitbags by Sir Stanley Spencer, CBE, RA (Cookham 1891– Cliveden 1959), 1927. Painted in Henry Lamb's studio in Hampstead before the artist moved to Burghclere to work in the Chapel itself, the scene depicts a newly-arrived convoy in the background pointing out their kitbags to the hospital orderlies, who then would deliver the bags too the patients in their wards. The drab and limited range of colours, and the stark architecture again help to evoke a cold, cheerless institutional scene. Exhibited at Stanley Spencer's first solo exhibition at the Goupil Gallery, London, in March 1927.