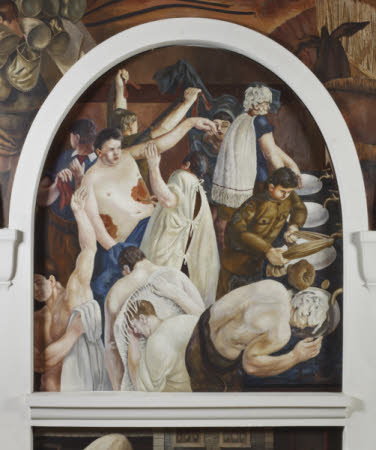 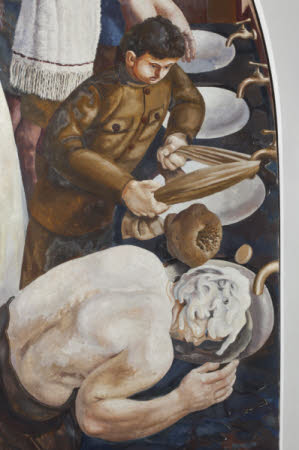 A sense of calm activity fills this everyday scene of a bathroom at Beaufort, busy with soldiers cleaning, drying themselves, dressing and, in the case of the man at the centre of the canvas, having iodine painted onto a wound, being treated by orderlies. The detailed depiction of the sponge seen below the orderly cleaning taps, as well as the towels and the soap suds in the soldiers’ hair, shows Spencer’s fascination with painting different materials and surfaces.

Oil painting on canvas, Ablutions by Sir Stanley Spencer, CBE, RA (Cookham 1891– Cliveden 1959), 1928. In the centre, an orderly is painting a soldier’s side with iodine in a scene reminiscent of Christ being lowered from the cross with the gaping wound produced by the Holy Lance; behind him another soldier pulls on his braces, but similarly holds his arms in the position appropriate for a crucifixion, while others wash, dry and dress. Three men in the lower left foreground are drying themselves with towels, partially shrouding their naked bodies. All the pathos of military hospital life is summed up in the dedicated manner in which a second orderly is polishing the basin taps. Spencer regarded the mundane activities with a sense of religious ritual and the hospital pictures symbolize a quotation from St Augustine's Confessions: '...ever busy at rest, gathering yet never needing; bearing; filling; guarding; creating; nourishing; perfecting.'