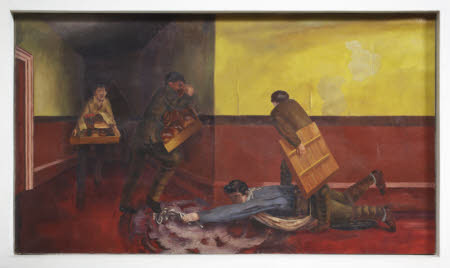 In the first of the smaller, predella canvases painted for the chapel, a shell-shocked soldier lies prostrate in a dark hospital passageway while he obsessively scrubs the floor with a soapy rag. Above him figures rush back and forth with trays of bread. Spencer would sometimes envy the repetitive, insular lives of the asylum patients at the Beaufort Hospital, saying ‘I would like to do things that way… I could contemplate. Nothing would disturb me’.

Oil painting on canvas, Scrubbing the Floor by Sir Stanley Spencer, CBE, RA (Cookham 1891– Cliveden 1959), 1927. One of the first of the predella canvases, painted in Henry Lamb's studio in Hampstead, in 1927, it is now on the North wall of the chapel. It was adapted from an unrealised 1921 drawing for the Steep war memorial entitled 'Scrubbing the Floor and Soldiers Washing, Beaufort Hospital Bristol'. It was exhibited at Stanley Spencer's first solo exhibition at the Goupil Gallery, London, in March 1927. It depicts a shell-shocked man in the hospital corridor scrubbing the floor. He has an obsessive way of throwing himself down to do the work, and the drab, featureless walls are deeply evocative of this depressing institution where Spencer began his wartime service. Two other men have come down a corridor to the painting's left, each carrying a tray loaded with loaves of bread. The foremost of the two is readjusting the loaves on his tray before proceeding.