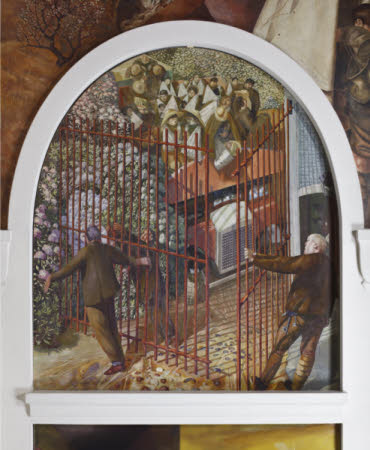 The narrative sequence of Spencer’s canvases from the Sandham Memorial Chapel begins with Convoy arriving with the Wounded. An open-topped bus, forces its way through rhododendron bushes to the gates of the Beaufort Military Hospital in Bristol, which Spencer described as being ‘as massive and as high as the gate of Hell’. The unpleasant-looking gatekeeper adds an ominous element to the wounded soldiers’ arrival. The keys at his belt belong to the chapel rather than the hospital, thus visually connecting the painting with its location.

Oil painting on canvas, Convoy arriving with Wounded by Sir Stanley Spencer, CBE, RA (Cookham 1891– Cliveden 1959), 1927. This was the first picture to be painted in the Chapel itself. It shows a convoy of wounded soldiers arriving at the Beaufort War Hospital. The ugly, thick set warder in the right foreground was based upon Sam Vickery, an unpleasant character who frightened Spencer. The key hanging upon his left leg in the picture is the same as those used for the Chapel doors at Burghclere. The rhododendrons crowding in on the scene are a local introduction inspired by the lanes around Burghclere, and Spencer used them to describe details of the hospital drive which he could not clearly recall. This painting immediately sets the tone of the whole Burghclere cycle - that of the human companionship of war, not the horror of front-line action.