The Samian Sibyl (after Guercino) 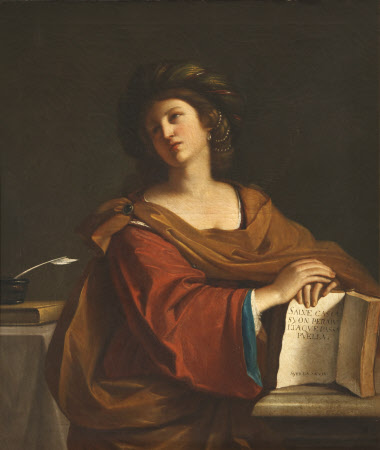 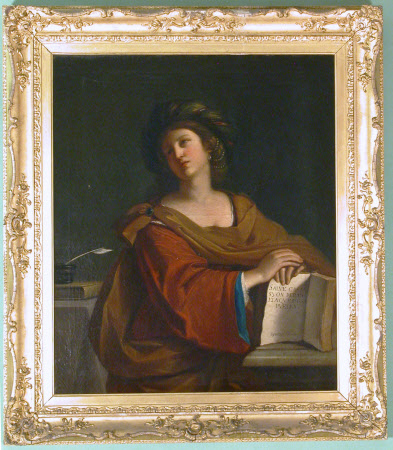 Oil painting on canvas, The Samian Sibyl (after Guercino), after Guercino (Cento 1591 – Bologna 1666). A three-quarter length portrait of a woman who is sitting at a table with a second table behind her upon which sits another book. She wears voluminous red robes with blue cuffs and a brown cloak and tilts her head backwards towards the left. Both her hands rest on an open vertical book, displaying the Latin inscription within: 'SALVE CASTA/SYON PERMUL/TAQUE PASSA/PUELLA./SYBILLA SAMIA'. This is a variant of the original of 1651,of which there is a studio copy in the Uffizi, commissioned by Giuseppe Locatelli, an Italian nobleman, in which the Sibyl is wearing red robes with blue cloak and pink cuffs. It was in the Spencer collection, Althorp and accepted in lieu in 2012 and is now on display at the National Gallery, London. Guercino painted The Cumaean Sibyl for another client at the same time and that is now also in the National Gallery. The Sibyls- whose number is variously given, but was most commonly accepted as ten - were women reputed to have existed at or since the beginning of Classical Antiquity, who were imbued with the power of prophecy. They took their respective names from the places or countries in which they resided. One reason for the frequency with which they were later depicted in Europe was that, two centuries after the destruction of the original Sibylline Verses by fire in the Roman Civil Wars, a spurious set was concocted, apparently foretelling the Birth, Passion and Death of Christ. The inscription on this Sybil's book means 'Hail to thee, chaste Sion, and Virgin who has suffered much'. The original of this picture was painted in 1651, and is in a private collection; a studio copy is in the Uffizi.

Given to the National Trust along with the Stourhead house, its grounds, and the rest of contents by Sir Henry Hugh Arthur Hoare, 6th Bt (1865 – 1947) in 1946; on loan to Osterley House from the Hoare Collection, Stourhead