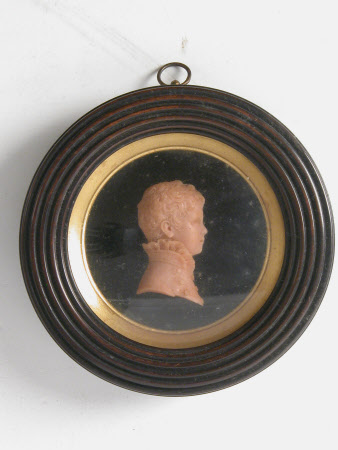 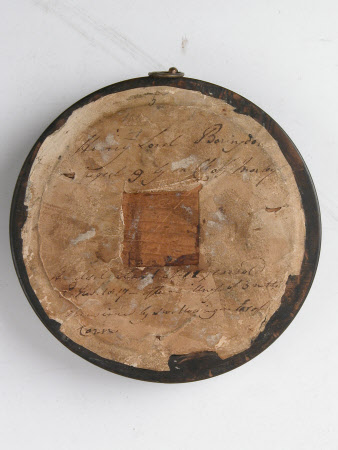 Henry Villiers Parker, Viscount Boringdon (1806-1817), was the son of John Parker, 1st Earl of Morley and his first wife Lady Augusta Fane (1786–1871). Henry died on 1 November 1871, aged 11, from the effects of swallowing an ear of corn while travelling on the Continent with his father and step-mother. He suffered for just over three months until he eventually died from an abscess in his lung. This wax portrait miniature was modeled in 1814, a few years before his death, by his step-mother, Frances Parker, Countess of Morley (1782-1857). The portrait is mentioned in 'Some Account of Lord Boringdon's Accident, on 21st July, 1817, and its consequences', London 1818, p. 16: 'The little wax model made of him by Lady Morley in 1814 was at the time, and continued to be, a strong likeness.' This was a published account of the accident, possibly written by Lady Morley herself. There is a manuscript copy of the 'Account' in the Jersey Papers at the London Metropolitan Archives (ACC 510/594). Frances Parker, Countess of Morley (1781-1857) was a talented amateur artist, skilled in oil and watercolour painting. As a young woman she won a number of premiums at the Society for the Encouragement of Artists for copies after works by Raphael and Titian. Her interest in wax modelling seems to have started following a visit in September 1813 from the well renowned wax modeller, Samuel Percy (1750-1820). Percy visited Saltram to model portraits of the Parker family and friends, but appeared to stay with the family for a few months. Percy, a Dubliner by birth, was an itinerant artist who had established himself as a leading modeller of coloured wax portraits (see NT 564569). He travelled extensively producing portraits of the gentry and nobility, and achieved the respected status as Wax Modeller to Princess Charlotte. It would appear that Percy taught Frances to model in wax during this time, and this miniature of Henry was possibly one of her first forays into wax modelling. Percy’s own miniatures of the Parker family taken at this time are untraced. There is another version of this portrait in white wax (Private Collection) as well as a portrait of Henry’s younger half-brother, Edmund, also modelled by Lady Morley. The portrait of Henry was presumably cast a number of times and distributed to various members of the family as was customary with wax portraits. Sarah Sophia Child Villiers, Countess of Jersey (1785 – 1867) was Henry's maternal Aunt, and was a frequent visitor to Saltram, the Parker family home, especially during the extended period of Henry's illness. It is likely that Lady Jersey was given a copy of the wax portrait by Lady Morley with the manuscript copy of 'Some Account of Lord Boringdon’s Accident'. It is possible that Lady Morley cast additional versions of the portrait after Henry’s death in 1817 as a memento of the young boy for close family. The Osterley version has a contemporary handwritten inscription on the reverse: ‘Henry Lord Boringdon/aged 9 by the Ctss of Morley//He died short of 11 years old/1 Nov. 1817 – after an illness of 3 months/occasioned by swallowing an Ear of/Corn.’ Anna MooreOctober 2017

Reverse: ‘Henry Lord Boringdon/aged 9 by the Ctss of Morley//He died short of 11 years old/1 Nov. 1817 – after an illness of 3 months/occasioned by swallowing an Ear of/Corn.’