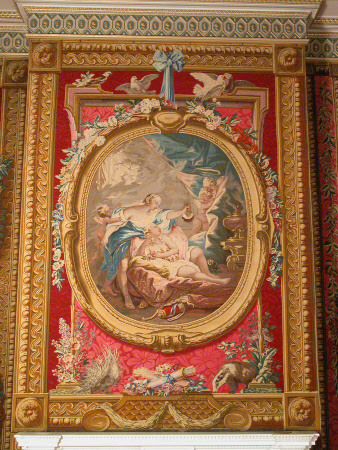 These tapestries were ordered from the famous Gobelins factory in Paris and are dated 1775. The medallion images were designed by the painter, François Boucher and depict the ‘Loves of the Gods.’ Incredibly their spectacular colour is as vivid today as it was over 200 years ago.

Tapestry, wool and silk, 8 warps per cm, Cupid and Psyche from the Tenture de Boucher, Jacques Neilson workshop, Manufacture des Gobelins after a design by Clément Belle, Maurice Jacques, Louis Tessier and Pieter Boel and conceived by Jacques-Germain Soufflot, 1775-76. This piece hangs over the fireplace on the east wall of the tapestry room. It is woven to imitate a wall with crimson silk damask wall hangings, carved and gilded mouldings around the edges, and a framed painting hanging from a blue ribbon in the centre. Garlands of flowers are draped over the frame of the painting and birds perch on the upper mouldings. At the lower edge there is a trophy in the centre with quivers of arrows and wreaths of flowers, and on either side a porcupine and a badger with sprigs of flowers. The painting in the centre, after a design by Clément Belle, shows Psyche holding a lamp to illuminate the face of her sleeping lover Cupid. On the gilded moulding at the bottom the tapestry is signed ‘Neilson éx 1775’.

As commissioned and installed under the direction of Robert Adam