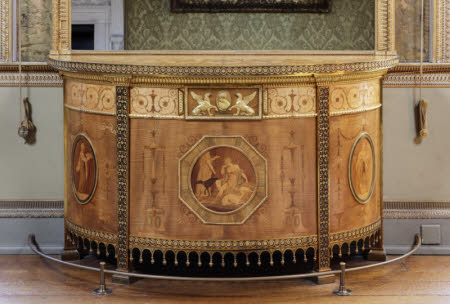 Commode, veneered with harewood, satinwood, rosewood and other woods; ormolu mounts. The commode is semi-circular form with four legs. The top with a complex pattern of marquetry, set at the edge on ormolu guilloche. At the frieze, the supporting moulding to the commode top reflecting the design as carved on the dado rail, ie a cyme recta profile moulding ornamented with fluting on the vertical, below a row carved moulding. The moulding is identical both in the sense of design and position, thus making the commode part of the wall. The frieze ornamented with a marquetry panel with engraved and inked lines of arabesques with central urn, at the centre in cast and chased ormolu, two griffins flanking a medallion portrait bust, at the base of the frieze an ormolu continual bay leaf motif mount. Below, the legs are carried to the top of the commode in the form of pilasters overlaid with a delicate arabesque design of scrolls and asthenia in ormolu, visually dividing the front of the commode into three unequal sections. There is a large central marquetry panel between the stiles and a smaller one at each side. In the middle of the central panel is a circular marquetry medallion within a brass bead, portraying Diana with her hounds. The panel set within a two and three dimension frame, comprised of an inner marquetry border of 'fluting' and anthemions in green-stained hardwood, and enclosed within an octagonal brass guilloche moulding. This is flanked by marquetry panels representing antique candlesticks and there is additional decoration of anthemia and scrolls on a satinwood ground. THe side panels are similarly treated, with an oval panel portraying a classical female figure. In the middle of the commode there is an oblong tablet with a brass frame, portraying an oval portrait medallion of a male bust, flanked by seated griffins.