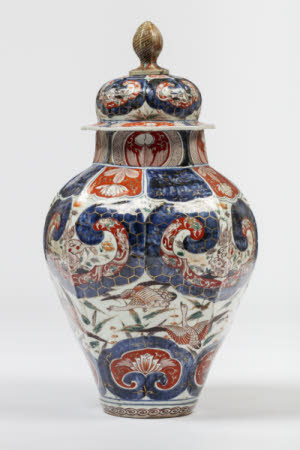 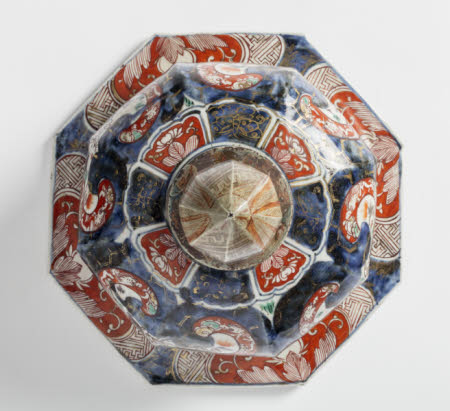 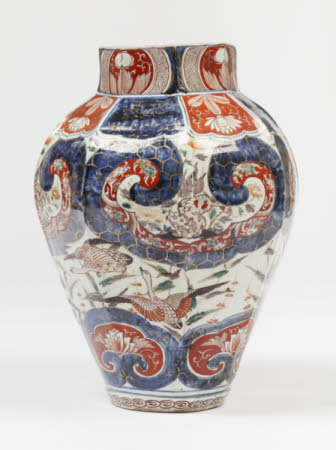 This jar and cover was made in one of the kilns located in southern Japan on the island of Kyūshū, near the town of Arita, in Hizen province, between 1700 and 1720. It was made for export to Europe, not as a storage jar, but as an ornamental object for display. It would originally have been part of a set of vases, typically three jars and two beakers. Such sets were very costly and were ordered and purchased by agents of the Dutch or English East India Companies as Private Trade, not as Company orders. These sets were initially decorated with the same unique pattern and were very costly, the profit was not sufficient for the Companies to invest in them themselves. Such sets were known in France as 'garnitures', as they garnished furniture and interiors, but the term was also used to describe sets of matching objects. The very bold decoration, designed to integrate with grand Baroque interiors, is described as Imari type, and sometimes known as Ko-Imari (old Imari) ware, which was introduced around 1695. The term Imari refers to the port of Imari, where export ceramics produced in Arita were transported to by land, before being packed onto vessels sailing to Nagasaki, where merchants from China and Europe, the latter based on the Island of Deshima, waited for shipments, hence, they were described as wares from Imari, when in fact they were made in Arita. Japanese porcelain production was much smaller than Chinese production, and generally more expensive. The decoration of white lotus flowers symbolised enlightened Buddhism, purity and spiritual perfection, as the plant grows out of muddy water; while Buddhist lion-dogs were protectors of the dharma and the geese in flight among reeds represent a flock migrating in Autumn. Patricia Ferguson, 2019

Perhaps among the quantity of 'Oriental jars' listed in the 1871 inventory, when owned by the Earls of Jersey, but perhaps a Child family heirloom. A 1922 photograph shows this covered jar standing in the Entrance Hall, in the window bay to the right of the door. Jersey bequest, November 1993.