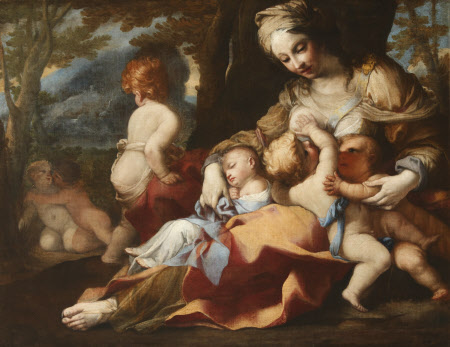 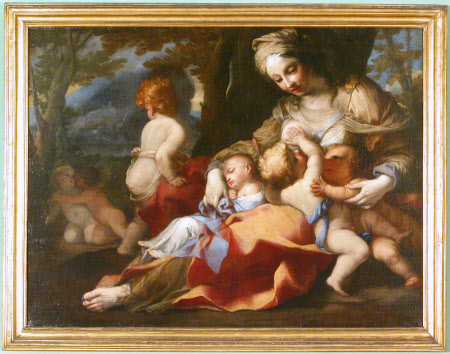 Oil painting on canvas, Allegory of Charity, by Raffaello Vanni (Siena 1587 - Siena 1673). A woodland setting, in which a woman in rustic dress comforts a number of children, one of whom sleeps, others play close by, with two embracing. Pendant to the Allegory of Faith (see NT 771298). Charity, or Divine Love, was one of the three Christian Virtues, and is sometimes represented, as in the chief motif here, by a woman nursing several children; and sometimes, as in the little scene on the left, by the chaste love of two infants embracing. Vanni was a Sienese who spent time in Rome under the patronage of his compatriot, the Chigi pope, Alexander VII (1599 - 1677) who was pope from 1655 until his death. He combines the inflence of Roman classicism with the colour and graceful style of his native school, following his predecessors like Beccafumi.

Sir Francis Dashwood (1708-1781), at West Wycome Park, and thence by descent; purchased at auction by the National Trust, 1986, with the help of grant from the Art Fund (then called the National Art Collections Fund); on display at Hatchlands and Clandon Park and at Osterley Park since 1991.