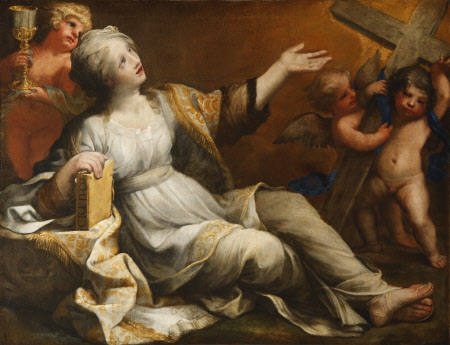 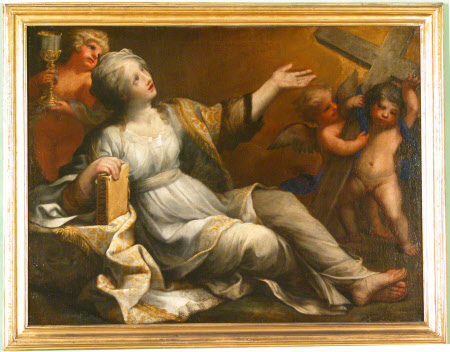 Oil painting on canvas, Allegory of Faith by Raffaello Vanni (Siena 1587 - Siena 1673). A full-length, reclining woman turned to the right, gazing upwards at a crucifix, dressed in a white muslim dress with a brocade cloak over her left shoulder; her right hand rests on a vertical book of the Credo, while two children support a crucifix to the right, and a third stands behind her head holding a large gold chalice. One of a pair of pictures, with [NT/CLA/P/141] representing two of the three Christian Virtues. Vanni was one of two sons of the Siennese follower of Barocci, Francesco Vanni, whose pupil he was before coming to Rome to study under Antonio Carracci. He ultimately rose to become Principe of the Accademia di San Luca in 1658-60. Despite this, his pictures - as in the case of these - remain outside the mainstream tradition of the Roman Baroque, and retain something of the sweet mysticism of the Sienese School.

Sir Francis Dashwood (1708-1781), at West Wycome Park, and thence by descent; purchased at auction by the National Trust, 1986, with the help of grant from the Art Fund (then called the National Art Collections Fund); on display at Hatchlands and Clandon Park and at Osterley Park since 1991.