Landscape with Rustic Bridge and Cattle 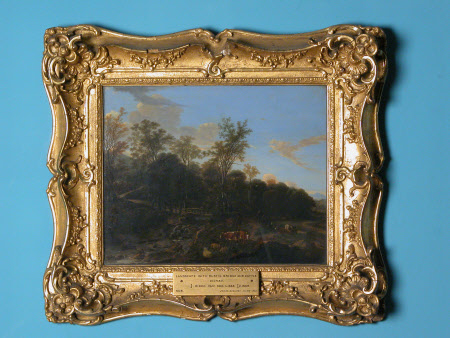 Oil painting on panel, Landscape with Rustic Bridge and Cattle by Dirck van der Lisse (fl.c.1635 - d.1669), 1640s. Cattle near river with stones on the foreground. A bridge crosses the river behind which is a small wood. Dirck van der Lisse (ca. 1607-1669) trained under the Utrecht landscape painter Cornelis van Poelenburgh (1594-1667) and moved in 1639 to The Hague where he was a founder-member of the painters' confraternity Pictura in 1656. He became Burgomaster of the city in 1660. This painting is a good example of the Dutch Italianate landscape painter Dirck van der Lisse. He often represents hilly wooden landscapes bathed in a warm sunlight with few figures and cattle, one of his favourite subjects being bathing nymphs. This landscape shows in a mere Dutch tradition ordinary people involved in a daily activity such as looking after the cattle and going on errands through the country. His work is distinguished by a yellow-golden palette that is used here through the subtle use of yellowish greens and reddish browns in the vegetation and the ground. These tones are echoed in the brownish colour of the cows' hides and in the golden yellow of the sheep's fleeces. The path leading to the rustic bridge and vanishing into the woods also structures the whole composition which is balanced by a lighter distant mountain in the far right. Therefore, despite the filled vegetation, the artist managed to provide his picture with a deep sense of space and expansiveness which is typical of Dutch Italianate landscape painters. [From V&A description]

John Jones; bequeathed to the Victoria and Albert Museum in 1882 from whom on loan