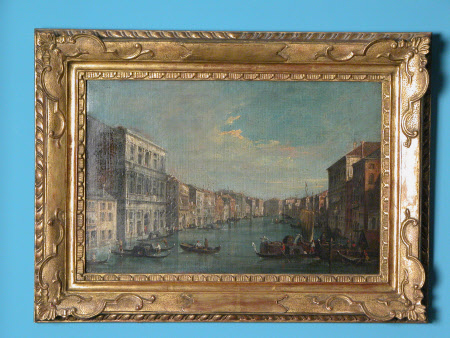 Oil painting on canvas, View of the Grand Canal from the Palazzo Grimani to the Palazzo Foscari, Venice after a painting by Canaletto (Venice 1697 – Venice 1768) and an engraving by Antonio Visentini (Venice 1688 - Venice 1782). 19th century. Venice, the Grand Canal looking south-west from the Palazzo Grimani. Gondolas in foreground crossing the water, most with passengers. One vessel on right laden with cargo. A line of builings either side of canal stretches away into distance. Antonio Visentini (1688-1782) was an Italian painter, engraver, architect and theorist. He was first known as a painter and trained with the Venetian history painter Giovanni Antonio Pellegrini (1675-1741). He became known as an engraver by the end of the 1720s when he was commissioned by Joseph Smith to produce engravings of Canaletto's views of Venice. Visentini started working as an architect in 1731, and his first theoretical work, Libro di Architettura, which included Rococo-influenced drawings by Pier Antonio Morelli after Visentini's ideas, was published in 1733. Later however, Visentini developed neo-Palladian and anti-Baroque ideas. Visentini and his pupils executed numerous drawings of ancient and contemporary buildings intended to disseminate exemplary architecture. He participated to the foundation of the Venetian Academy in 1755, where he became a teacher of architectural perspective in 1772. This painting is a 19th century copy after an etching by Antonio Visentini who was commissioned to engrave a series of views of Venice after Canaletto. The painting shows a perspective view of the Grand Canal in Venice, from the Palazzo Grimani on the right hand-side to the Palazzo Foscari. The second building on the right is the Palazzo Businello and the third the Palazzo Coccina-Tiepolo. The painter also imitated Canaletto's art of painting with a bright palette and a free brushwork. [From V&A description]

On loan from V&A