Landscape with the Floralia 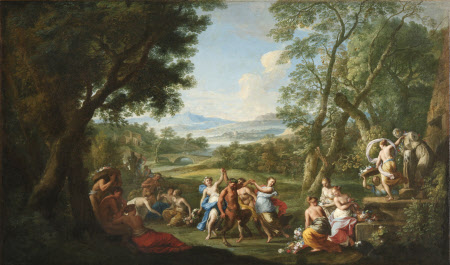 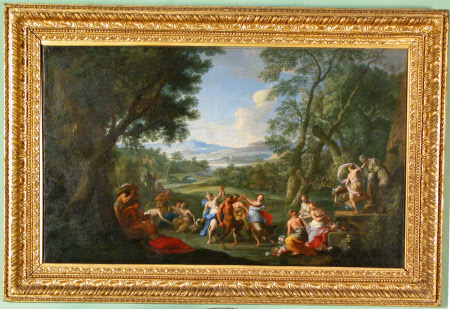 Oil painting on canvas, Landscape with the Floralia by Andrea Locatelli (Rome 1695 – Rome 1741?). A landscape woodland setting, with figures in a glade in the centre dancing, to the right a second group of figures shelter under the trees and stand upon rocks watching. All are dressed in classical clothes. This painting celebrates the classical never-neverland dear to the 18th century. The Roman goddess of flowers and gardens was not the innocent nymph, known to the Greeks as Chloris, abducted and then married by the wind-god Zephyr, but originally a common courtesan. The celebration in Rome of the games called the Floralia began on 28th April, and involved the exhibition of naked women in the amphitheatre, in what Lemprière calls 'scenes of the most unbounded licentiousness'. The satyrs introduced into the present painting imply similar abandon in an earlier and mythical past. Flora - apparently represented by the armless statue of a woman being garlanded with flowers on the right - was the Roman goddess of flowers, and Priapus - seen in the form of a herm in the far left distance - was the Greek god of fertility, and so of gardens. Locatelli was rare amongst the practitioners of landscape painting in Rome in being not only Italian, but Roman-born. The chief influence on him was Jan Frans van Bloemen, known as Orizzonte (1662-1749) but Locatelli was less bland and more dynamic. Unlike Orizzonte, he also almost always painted his own figures, so that there is more of an interplay between these and the landscape. The works of both painters were much sought after by those on the Grand Tour. Pendant to Bacchanal with Drunken Sileus on an Ass, NT 771212.