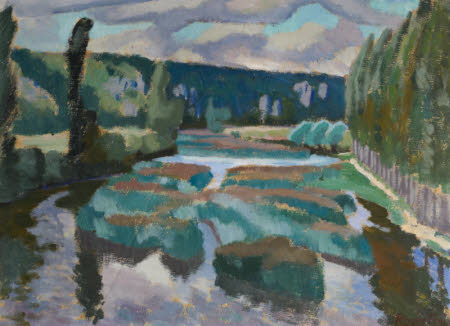 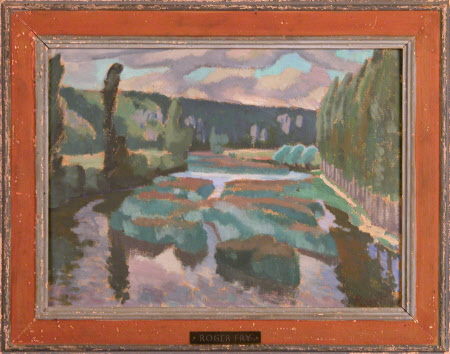 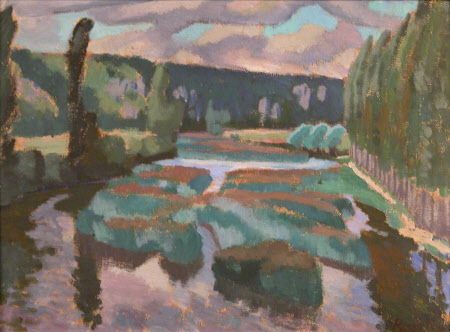 This view was painted from the bridge at Angles sur l’Anglin, near Poitiers, in France whilst the artist was on a cycling and sketching trip with Duncan Grant, accompanied by the art critic Clive Bell in October 1911. Fry had discovered the art of Paul Cézanne in 1906, the year of Cézanne’s death. Fry’s style in this picture shows the influence the French artist had on him with the almost monochromatic tone of muted colours in large blocks displaying ‘ significant form’: a combination of lines, colours and shapes that move one aesthetically. The following year Fry showed the Post-Impressionists (a term which he coined) to a British audience for his second exhibition at the Grafton Galleries, London.

Oil painting on cardboard, Study for 'River with Poplars' (from the Bridge at Angles sur l’Anglin near Poitiers in France) by Roger Eliot Fry (London 1866 - London 1934), signed in red paint, lower right, 1911. Landscape study for a larger picture 'River with Poplars' now in Tate Britain, London. The is probably the painting by Fry that George Bernard Shaw gave to Virginia Woolf.