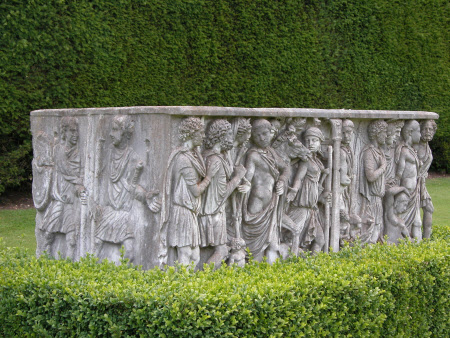 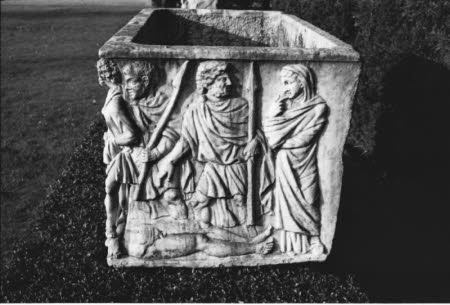 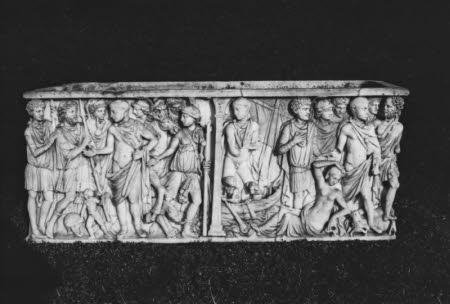 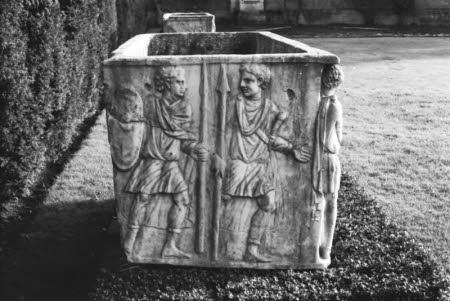 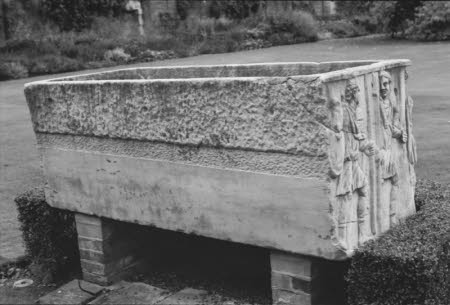 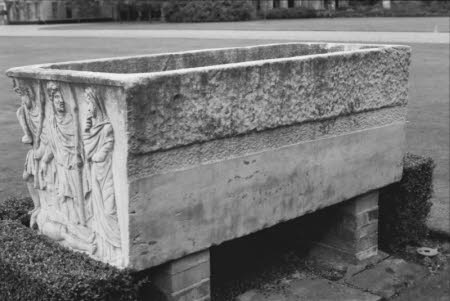 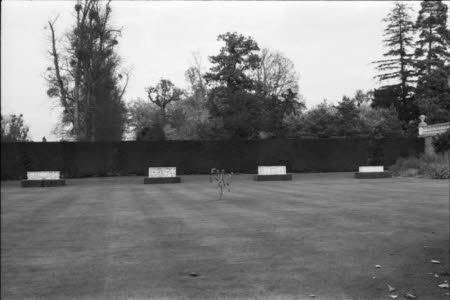 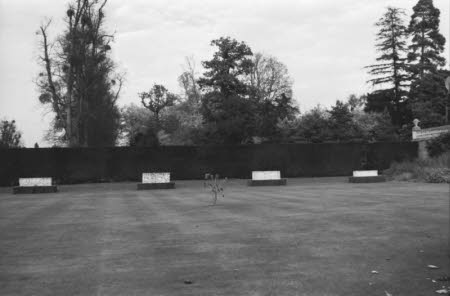 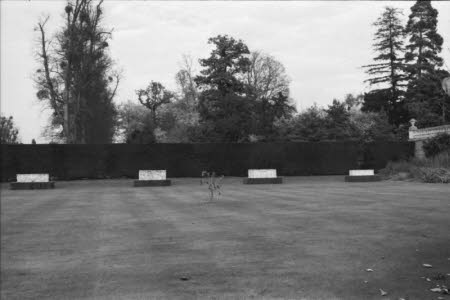 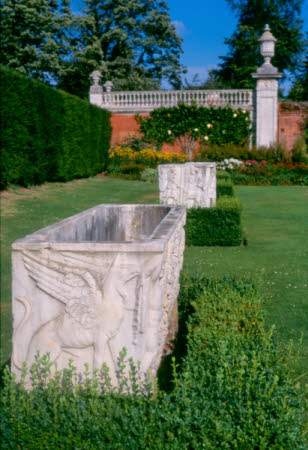 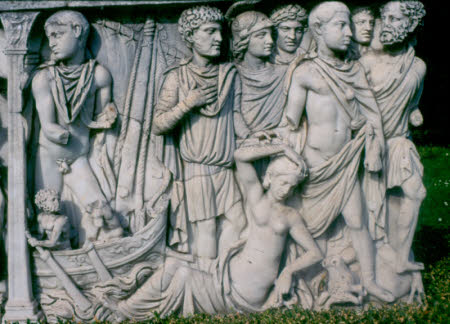 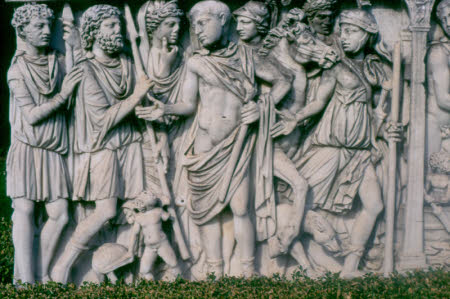 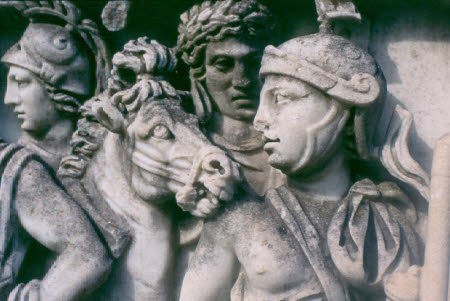 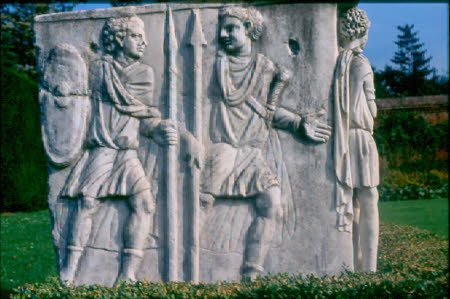 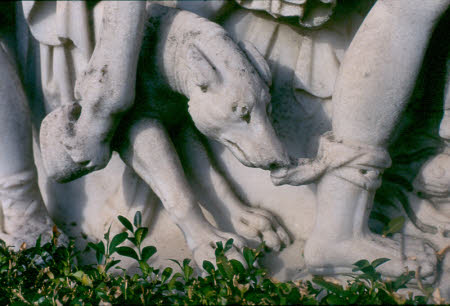 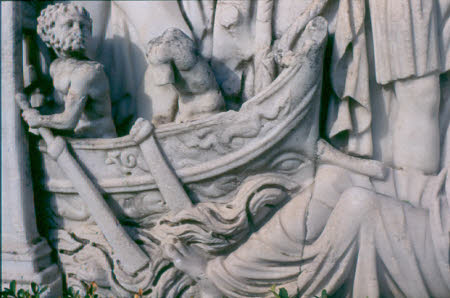 Marble, the Theseus Sarcophagus, Roman, c.240-250 AD. A Roman sarcophagus with three sides carved in a high relief depicting scenes from the story of Theseus and Ariadne.

The long side shows two pendant scenes divided by a central pilaster. To the left of the pilaster the hero Theseus, nude with drapery, is shown meeting King Minos, bearded and holding an iron spear. Virtus, deity of bravery and military strength, is to the right of Theseus, entreating him to leave and kill the minotaur. Honos, the god of honour associated with Virtus, stands behind Theseus alongside Pallas Athene. The woman with the diadem and veil is probably Venus, with her son, the tiny winged figure of Eros (Cupid) standing at Theseus’ feet, next to his helmet. Around the left corner, on the short side, are two soldiers: a continuation of King Minos' entourage. To the right of the central pilaster Theseus is depicted talking to Daedalus after having slain the Minotaur. Hermes, with winged hat, is in the background. The Minotaur’s bull head can be seen at bottom right and his human body is continued around the right corner, on the short side, attended by two soldiers and Ariadne, daughter of Minos, at far right. Out of devotion to Theseus Ariadne gave him a sword to slay the Minotaur and ball of thread so that he could find his way out of the Minotaur’s labyrinth. On the same panel, to the immediate right of the central pilaster, Theseus is depicted for a third time, abandoning the reclining Ariadne in Naxos, on Pallas Athena’s orders, and sailing back to his father Aegeus in Athens. Theseus promised Aegeus that if he survived the Minotaur he would sail back to Athens with white sails raised instead of black. Distressed at having been forced to abandon Ariadne, Theseus forgot to order the sails to be changed to white. When Aegeus saw Theseus’ ship, raised with black sails, he believed his son to be dead and committed suicide. Ariadne, meanwhile, became the wife of Dionysus. This sarcophagus, one of eight installed in the forecourt at Cliveden, was found in October 1883 at Castel Giubileo, Rome, the site of ancient Fidenae. According to his article ‘Roman Sarcophagi at Clieveden’ ('Journal of Hellenic Studies', 1900) the historian C Robert writes that it was found during excavations by the Fratelli Bianchi (Robert 1900, p.86) and once had fragments of a lid carved with dolphins and shells in reference to Theseus’ voyage at sea. Another lid fragment was also found bearing the inscription: D.M. APTEMTDORI (sic). AVG.LIB.ADLECTO A.MEMORIA QV.ANN.XXII D.XVII.VALERIA PHILO[…]NE FILIO.DVL CISSIMO This is a funerary inscription in memory of Artemidorus, the seventeen-year-old son of Valeria. Theseus is presumably associated with Artemidorus who, through death, abandoned his mother Valeria figured as Ariadne. The provenance notes for this sarcophagus state that it was purchased direct by William Waldorf Astor, later 1st Viscount Astor, who served as the US Minister to Italy in the 1870s and 80s. Other sarcophagi were acquired from the Borghese estate and the Villa Taverna at Frascati. Alice Rylance-Watson January 2019