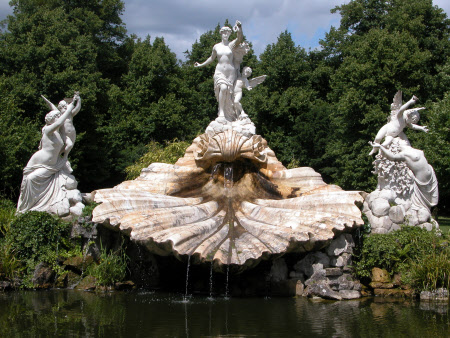 The monumental, two-colour marble group, The Fountain of Love, was designed and carved in Rome by Thomas Waldo Story (1855-1915) son and pupil of the American dilettante sculptor William Wetmore Story (1819-95). The figures are signed and dated 'Waldo Story Roma 1897'. Three white marble groups of scantily draped female figures cavort with amorini standing on top of a sienna marble shell. The shell sits on tufa, forming a realistic rockwork base. The fountain jets spurt up and then fall into the basin below. It sets the tone for the grandeur and impact of the gardens at Cliveden. The Fountain of Love forms the grandest of a group of works commissioned by W.W. Astor for Cliveden from the American sculptor who lived in Rome, Thomas Waldo Story (1855 -1915). Like his father, William Wetmore Story (1819 – 1895), he was a successful sculptor. Thomas Waldo opened his studio in the Palazzo Barberini to the public to provide a gathering place for the art loving, wealthy Americans who travelled to Rome in the 19th century in search of culture and education. Henry James observed that the Victorian American did love Rome, but what they loved was ‘no Rome of reality, but an imaginary place, a Rome of the mind’. Generally, wealthy Americans admired the Rome of classical antiquity and the Renaissance, not the Rome of Bernini and the Baroque. W.W. Astor shared the preferences of his peers and collected sculptures of the late Classical and Renaissance periods. However, in commissioning this new large sculpture group for the most prominent site on the Grand Avenue at Cliveden, he showed boldness and courage. Astor recorded his own response to the sculpture in his personal note book in 1920: 'The female figures are supposed to have discovered the fountain of love and to be experiencing the effects of its wonderful elixir.' The emotional impact of the fountain almost reaches the quality of the work by Bernini. Similarly, the scale of the sculpture and the animation of the figures bears more than a passing resemblance to Bernini’s Fontana Tritone, which stands outside the Palazzo Barberini, Story’s home and studio.