View of Kew with Frederick, Prince of Wales, playing the Cello accompanied by his sisters 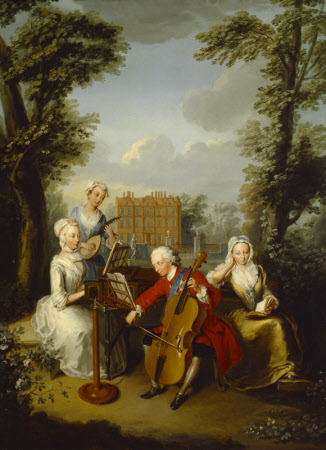 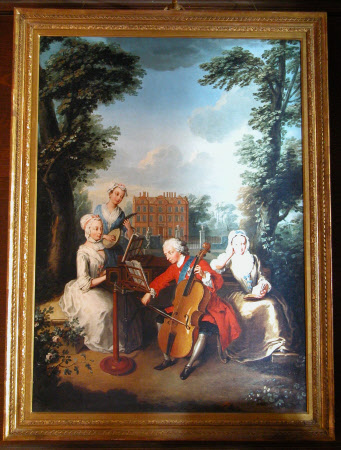 Two paintings. One original, and one the reproduction of the original. Oil painting on canvas, View of Kew with Prince Frederick Louis, Prince of Wales (1707–1751) playing the Cello accompanied by his Sisters by Philippe Mercier (Berlin 1689 – London 1760), circa 1733 - 1750. In the centre of the scene the Prince in red jacket with blue sash sits playing the cello. To the left a sister, Princess Anne (1709 - 1759), in white is seated at the harpsichord and behind her another sister, Princess Caroline (1713 - 1757), in blue, is playing a mandolin (or mandora, a type of lute). To the right another sister, Princess Amelia (1711 - 1786) in yellow, a book in her left hand (Milton's poems; possibly referring to his L'Allegro) and she is therefore possibly representing Mirth, her right elbow leant on the end of the harpsichord. Framed by trees with Dutch house at Kew behind palings in centre background. Another exterior version (cut down and now in horiziontael format) is in the National Portrait Gallery, dated 1733 and an interior version in an unidentifiable location is in the Royal Collection. Mercier served as Painter and Librarian to Frederick, Prince of Wales from 1728 until 1738.