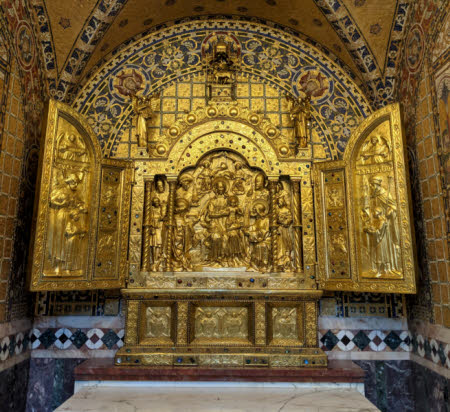 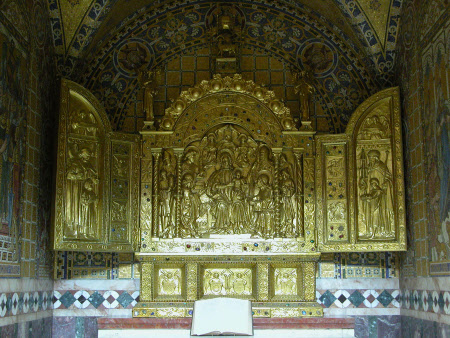 A triptych is a piece of art which consists of three sections. This gilt metal triptych created by the firm of Messrs Barkentin & Krall, who were ecclesiastical metal workers and shows the Adoration of the Magi and features jewels on the surround.

A gilt metal triptych, the arched central panel depicting the Adoration of the Magi in high relief, the right wing a saint with a model of a church in his right hand, a beaming boy with gift before him and angel above, the left wing with a saint, a globe in right hand and also a beaming boy and angel. The plain outside with 'XPC' monogram within circle of flower heads on right, 'IHC' on left. Base of three panels, the central one with two angels, the outer two with one. Each bear shields with signs of the crucifixion. Various cabochon jewels scattered on base and panel surrounds. Surmounted by two angels playing the harp and two trumpets, the Agnus Dei beneath an architectural canopy.

The interior of Giacomo Leoni‟s Temple of c.1735 was re-designed by Frank L Pearson on the instruction of W W Astor to create a chapel and family mausoleum which was consecrated in 1906. Pearson was a good choice to re-design the chapel as he had completed five commissions between 1895 and 1903 to refurbish chapels in Scotland; these included a triptych for the Holy Trinity Church in Ayr (1896) and reredos and choir stalls for St Ninians Episcopal Cathedral Perth (1898) The walls, floor, windows and furniture for the Cliveden chapel were conceived by the architect a single decorative scheme and should be understood in that context.