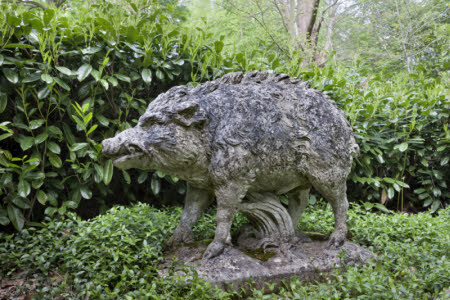 How suburban outer London had become! Or so it must have felt in 1848 when exiled French King, Louis-Phillipe was forced to borrow Claremont and its landscape garden from Leopold, King of the Belgians. Louis-Phillipe and his wife, Marie-Amelie, did their best to make it fun for their children, building – among others things – mock fortifications to enable training in the art of war. Hunting, however, had been their chief pleasure back in France, so their friend the Comte d’Artois imported a wild boar for them to hunt. London’s deep south held little in common with the forests of France, and the boar itself battled as much with the traffic as with the royal huntsmen. The boar ended up being despatched – no doubt, much to the distaste of the suburban English shoppers – in Esher High Street. The stone boar commemorates this event and is a much more manageable addition to the garden.

Stone boar. One of three stone animals relating to the Duke of Newcastle's family coat of arms displayed on the Claremont estate. The sculpture may have once topped a gate-pier, perhaps at the Claremont Lane lodges.