The Virgin of the Immaculate Conception 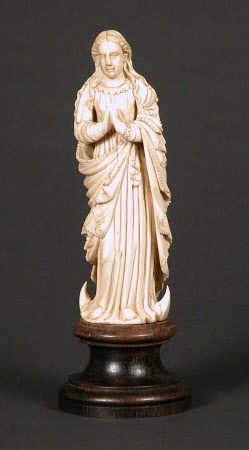 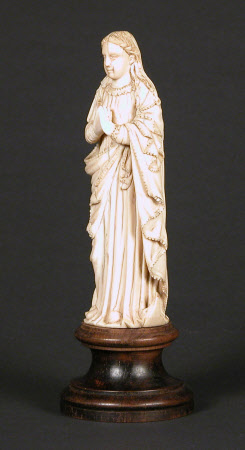 In Marian iconography the Virgin with a crescent moon is identified with the Woman of the Apocalypse, described in the Book of Revelation as a woman with 'the moon under her feet, and on her head a crown of twelve stars'. The statuette was probably produced in the middle of the 17th century in Goa or Sri Lanka, then Portuguese colonies. To cater to colonial tastes and to resident missionary Orders, Goan and Sri Lankan artists used often imported Mozambique ivory and adopted baroque Christian subject matter to form a contemporary Indo-Portuguese style of sculpture. Ivories such as this were presented as diplomatic gifts to Western rulers or used in the dissemination of Christian imagery. They were also exported to Europe, for display in religious institutions and private collections. For similar examples see Victoria and Albert Museum, London, nos. A.60-1949 and A.35-1940. Alice Rylance-Watson January 2019

Bequeathed to The National Trust in 1939 by Caroline Kipling, Rudyard Kipling's widow.