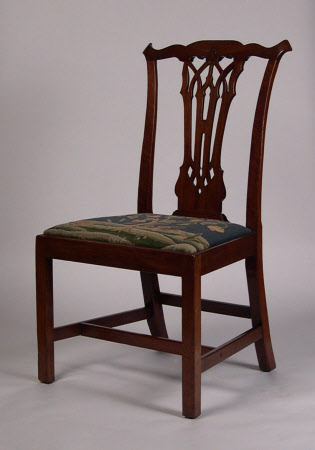 A chair, one of a set of seven mahogany dining chairs, English, 19th century, in George III style. The set comprising six standard chairs (NT 760838.1-.6) and an open armchair (NT 760838.7). The set extended with another open armchair (NT 760919) of a very similar, but slightly different, design. Both armchairs raised with blocks at the end of their legs, reputedly an alteration made by the Kiplings. All with drop-in seat pads covered with woollen needlework - in coarse tent stitch worked by the Royal School of Needlework - of fruit trees, deer and other animals. This standard chair with serpentine toprail and pierced, Gothic vase-shaped splat, pierced with foils and with spars forming a lancet arch. The drop-in seat pad in plain seat rails and raised on four chamfered square-section legs joined by an 'H'-shaped foot stretcher and higher rear stretcher.

Listed in the Dining Room in the inventory taken at Bateman's in 1939. Bequeathed by Caroline Starr Balestier, Mrs Rudyard Kipling (1862-1939) with Bateman’s and its contents.