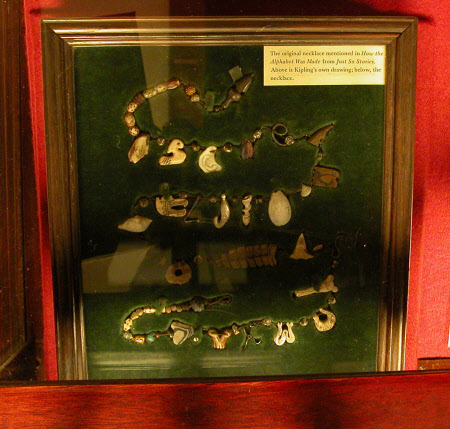 This necklace was made for Kipling, based on his description and drawing in the story ‘How the Alphabet Was Made’, in: Just So Stories (1902). Commissioned by Sir Percy Bates from Captain Spink, a London jeweller, and presented framed. Kipling called it in jest ‘one of the most beautiful pieces of Neolithic art that has ever been produced’. (source: Kipling to Bates, 31 May 1927: in The Letters of Rudyard Kipling Vol 5, edited by Thomas Pinney, p366)

How the Alphabet Necklace Was Made How the Alphabet Was Made is one of the Just So Stories, published in 1902. As Kipling told it, the first alphabet was created by a little girl called Taffy and her father Tegumai. This Stone Age pair had already tried to write a letter by drawing pictures on bark, but this led to much misunderstanding. In the story that follows, Taffy and her father create the alphabet. They drew a shape for each letter, using simplified sounds and facial expressions. Kipling wrote: ‘One of the first things that Tegumai Bopsulai did after Taffy and he had made the Alphabet was to make a magic Alphabet-necklace of all the letters, so that it could be put in the Temple of Tegumai and kept for ever and ever. All the Tribe of Tegumai brought their most precious beads and beautiful things, and Taffy and Tegumai spent five whole years getting the necklace in order.’ (source: Kipling, How the Alphabet Was Made, 1902) The necklace becomes real Kipling drew all the illustrations for the Just So Stories. His daughter Elsie recalled: ‘My father inherited a great deal of his own father’s artistic ability and was often busy with pencil and paintbrush illuminating…he took infinite pleasure in the drawings of the delicate and fantastic letters for ‘How the Alphabet was made’ in the Just So Stories.’ (source: Bryant and Weber, John Lockwood Kipling, p413) The necklace on display at Bateman’s was made 25 years after the story was published. Kipling scholar Thomas Pinney reveals the circumstances in The Letters of Rudyard Kipling (Volume 5, 365-367). Sir Percy Bates, Editor of the Morning Post, had commissioned the London jeweller Captain Spink to make the necklace from Kipling’s drawing. Bates wrote to Kipling, pretending he had gone to his house to look for the ‘original necklace’, and finding him out, had taken it away to have it repaired. Kipling played along: ‘You were…aware that that the Necklace is one of the most beautiful pieces of Neolithic art that has ever been produced. In delicacy, material, spirit and significance it is unequalled. I do not therefore blame Captain Spink if, as a virtuoso, he so far forgot himself as to break the law to steal it. Your position is different. You appear to have been the master-mind in the plot, actuated, as I see it, less by any abstract love of Art than by a cold-blooded passion to possess an article without duplicate.’ Kipling accepted the necklace as a gift. ‘It is absolutely the prettiest and cleverest bit of work I’ve ever seen and I nearly had a fit when I looked at the photo and my original drawing’. Taking a closer look The jeweller stayed very close to Kipling’s drawing and description. The beads are made of wood, stone, metal and organic material. Some have dots or bands, and between each letter shape is a small bead with the letter repeated. In the story, Kipling had explained why the K and L were in the wrong order (‘the necklace was broken once and they mended it wrong’), and why the P and Q were missing (They were lost, a long time ago, in a great war, and the tribe mended the necklace with the dried rattles of a rattlesnake, but no one ever found P and Q. That is how the saying began, ‘You must mind your P’s. and Q’s.’) Sir Percy Bates brought the necklace to Bateman’s in May 1928. It was framed in a special presentation case, as if a true Neolithic artefact. This is how it remains at Bateman’s.