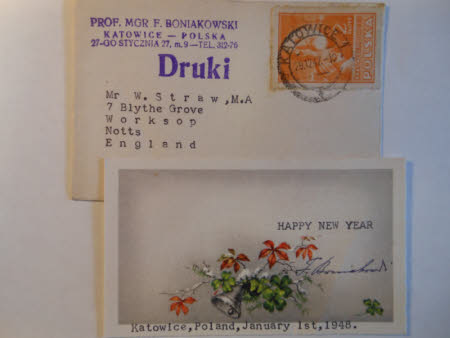 Christmas Greetings Card - Postcard style, single sided with envelope. Card: Front: Picture of a silver bell surrounded by fir tree bows, clovers and five fingered red leave stems all covered in snow. Verse: 'HAPPY NEW YEAR' typed in black ink and hand written signature 'F.Boniakowski' in black. Text: Typed at the bottom on the front under the image is 'Katowice, Poland, January 1st, 1948.' Envelope: Stamped in blue ink in the top left corner 'PROF. MGR F. BONIAKOWSKI, KATOWICE - POLSKA, 27 - GO STYCZNIA 27, m.9 - TEL. 312-76, Druki'. Next to this in the top right corner is an orange postal stamp put on side ways depicting a man holding a young boy in a country scene with '2 ZLOTE' in the bottom right corner. Under the picture are the words 'BRAT ALBERT 1846-1916 POLSKA'. The postal stamp is covered by a circular postal mark stamped in black ink with 'KATOWICE' at the top and '29.12.47.-10' in the middle. Beneath the blue writing is typed the address in black ink 'Mr W. Straw, M.A, 7 Blythe Grove, Worksop, Notts, England'. The back of the envelope has a triangle opening flap and is plain. The man depicted in the postal stamp is Albert Chmielowski a Polish Religious Brother and founder of the Albertine Brothers and Sisters. He is honored as a Saint of the Catholic Church. Albert is known in Polish as Brat Albert meaning Brother Albert; in recognition of his holiness, he is often called "Our God's Brother". He was born Adam Hilary Bernard Chmielowski in Igolomia, on the outskirts of Krakow, on 20 August 1845, to a wealthy aristocratic family, one of the four children of Adelbert Chmielowski and his wife, Josephine Borzyslawska. At an early age, however, he and his siblings lost their parents and were raised by relatives. When he was of age, he initially studied agriculture at the Polytechnical Institute at Pulaw, to prepare himself for managing the family estate. Becoming involved in politics, Chmielowski lost a leg at the age of 18 while taking part in the Polish nationalist Uprising of 1863, as a result he had to leave Poland. He settled in Ghent, Belguim, where he studied engineering. During this period he also began to paint and traveled toParis and Munich to further his training in art. He was finally able to return to his homeland in 1874, where he became a well-known and popular artist in Krakow. With his strong political convictions inspiring his interest in the human condition, and a gentle and compassionate spirit, Chmielowski became aware of the suffering of the poor of the city he devoted his artistic talents to this awareness, painting one of his best known works, the Ecce Homo, depicting the thorn-crowned Jesus. After years of reflection, Chmielowski decided to abandon his career, to live among the poor and needy and to accept a beggar's life and lifestyle. On 25 August 1887, Chmielowski joined the Third Order of St. Francis and was given the gray habit of the Order, at which time he began to call himself Brother Albert. He took up residence in the public shelter where he had been serving. One year later, he professed religious vows and founded the Brothers of the Third Order of Saint Francis, Servants of the Poor, in honor of their founder as the Albertine Brothers. In 1891, together with the Blessed Bernardina, he founded a parallel women's congregation.