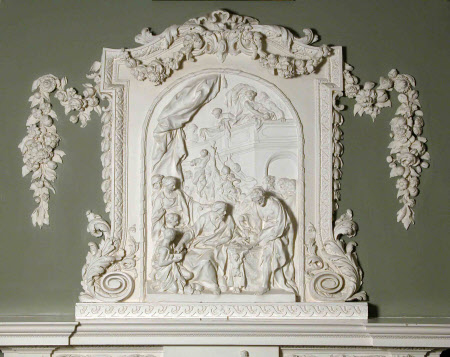 Painted terracotta and plaster, Tobit lending money to Gabael by Pierre Legros II (Paris 1666 - Paris 1719). An arched panel in high relief, with Tobit lending money to Gabael on chimney piece. Brought from Wavendon in 1913. The original is in the chapel of Monte di Pieta, in Rome. According to the apochryphal Book of Tobit, the King of Assyria gave Tobit an important post in the government which required him to make purchases in Media. On a visit to Rages in Media, Tobit deposited ten silver talents of his own money with his kinsman Gabael. After the death of the King of Assyria and the accession of the king's son Sennacherib, the roads to Media became unsafe and Tobit could no longer visit Gabael.

According to Edward Wright, bought by George Parker, 2nd Earl of Macclesfield (d.1764) whilst they were both in Rome;