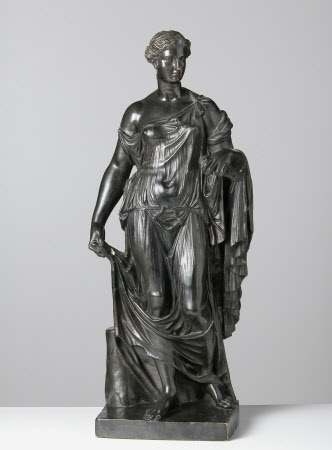 Painted black plaster sculpture, Farnese Flora by John Cheere (1709 – London 1787), signed Cheere. The original Roman marble statue after a Greek statue of Aphrodite of the fourth century BC was recorded by Aldrovandi in Rome in the courtyard the Palazzo Farnese. It was drawn by Marten van Heemskerck whilst he was in Rome between 1532/36. There was a terracotta copy made by Rysbrack for the Pantheon at Stourhead in Wiltshire between 1759 and 1762 now in the V&A, London. Zoffoli made a statuette after Pacetti's model of 1773 in the Ashmolean, Oxford.