Perseus and Andromeda (after Reni) 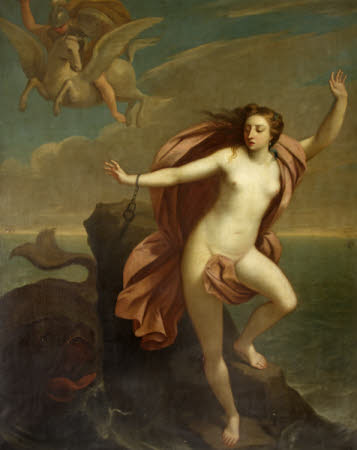 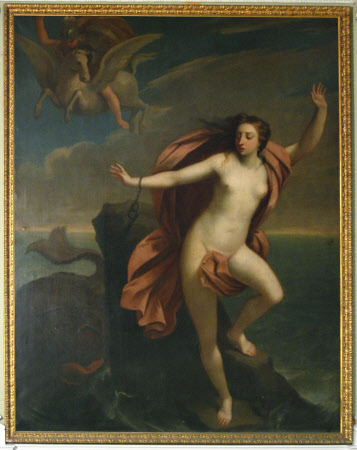 Perseus arrives just in time on his winged white horse, Pegasus, to rescue Andromeda, daughter of an Ethopian king, from a sea monster that looms behind the rock she is chained to with its jaws open. The artist copied from a copy, once in the Royal Collection and now in the National Gallery, London, which was itself after the original painting by Guido Reni, 1635-6, in Palazzo Rospigliosi-Pallavicini, Rome. The mytholgical story is told by Ovid in his Metamorphoses.

Oil painting on canvas, Perseus and Andromeda by Jeremiah Davison (Scotland c.1695 – London 1745). Andromeda is seen chained to a rock being sacrificed to a sea monster sent by Poseidon/Neptune.The monster is seen looming behind the rock with its jaws open. Perseus, her rescuer, arrives on his winged white horse, Pegasus, in the sky on the upper left. The scene depicted is an episode from the Roman poet Ovid's Metamorphoses IV, 783-960. This painting, like the copy in the National Gallery, London (in the Royal Collection between 1723 - 1836), is after the original painting by Guido Reni, of 1635-6, in Palazzo Rospigliosi-Pallavicini, Rome.