Classical Landscape with Diana and Actaeon 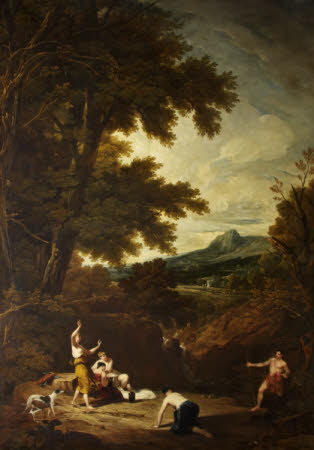 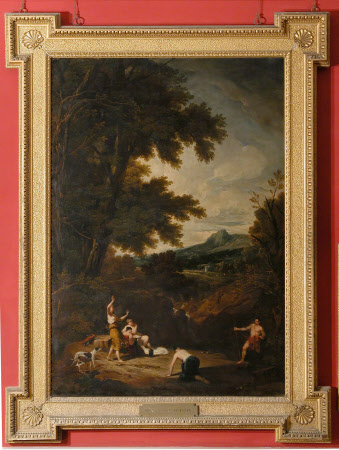 The semi-clothed hunter Actaeon appears from the right. The conventional scene from the mythological story of the Roman poet Ovid’s Metamorphoses has Diana, the virgin goddess of the hunt, accidentally discovered, naked, in her secret bathing place with her nymphs - for which she enacts revenge by transforming Actaeon into a stag and then he is killed by his own dogs. Here she is more clothed than he is. The pose of Diana, conversely, echoes that of Actaeon in Titian’s famous painting of the same subject which was on exhibition at the Marquess of Stafford’s gallery at Cleveland House when this painting was executed, in 1810. The pair of artists painted this in emulation of a celebrated collaboration between Carlo Marratti and Gaspard Dughet on the same subject, which hangs at Chatsworth House.

Oil painting on canvas, Classical Landscape with Diana and Actaeon by Sir Augustus Callcott Kensington 1779 - Kensington 1844) and William Owen (Ludlow 1769 - London 1825), exhibited at Royal Academy, 1810. An upright landscape with tall trees at the left, beneath which Diana and her nymphs are resting. Actaeon appears from the right. Painted in emulation of a celebrated collaboration between Carlo Marratti and Gaspard Dughet on the same subject.