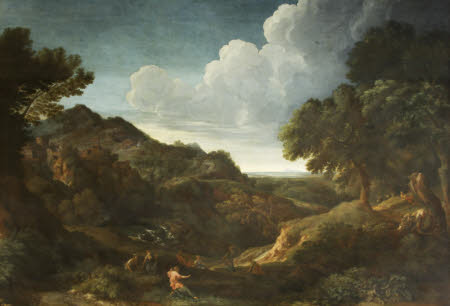 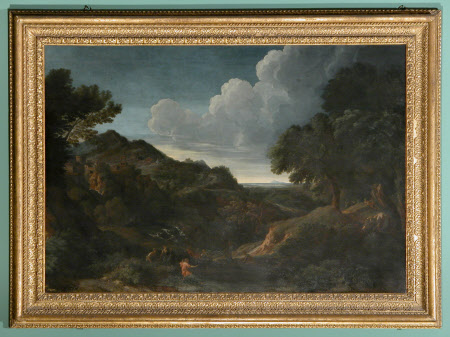 Despite its traditional title, it is by no means certain that Eurydice, a wood nymph who married Orpheus and was killed by a snake and dragged into the Underworld, is shown here although there are small figures present, one recoiling, in the grand Italianate landscape. This picture was bought by Horace Mann from the Marchesi Arnaldi in Florence in 1758, for Henry II Hoare (1705 – 1785), along with its pendant, also at Stourhead. For Hoare these ‘Gaspard Poussins’ were the next best thing to a genuine Claude, which he desperately wanted. Dughet adopted the name of his brother-in-law Nicolas Poussin, whose paintings incidentally often include snakes, although he mostly worked in Rome. Nonetheless, these pictures were given to his nephew and son-in-law, Sir Richard Hoare, 1st Bt(1735 – 1787), who hung them at Barn Elms, from whence they went to Wavendon, and were not brought to Stourhead until the end of the 19th century.

Oil painting on canvas, Mountainous Landscape with, possibly, Eurydice by Gaspard Dughet (Rome 1615 – Rome 1675), circa 1658/9. A classical landscape, with a hill town on the left, tall trees on the right, and a distant view between of the Roman Campagna and Mount Soracte, shown as an island in the sea; in the foreground a group of figures with a woman recoiling from a snake, supposedly Eurydice, but the pursuing figure of Orpheus, as told by the Roman poet Ovid's in Metamorphoses 10:1-10, is not to be seen.

Verso: [not seen, but there evidently is – or was – a label on the back like that on P/43, recording the cleaning of the picture by W. Catowill for Henry Charles Hoare, but in 1845, rather than 1844]