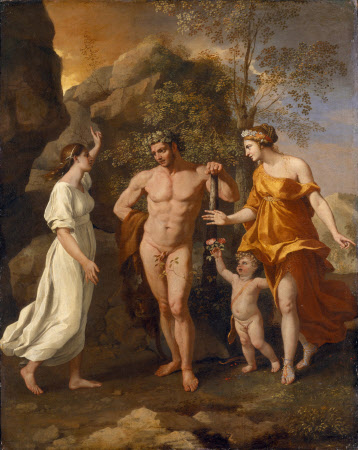 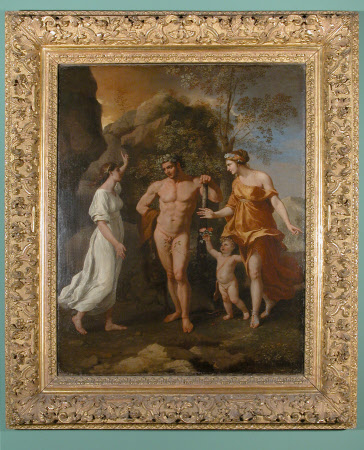 A young naked and beardless Hercules, crowned with a laurel, leans on his club at a crossroad. The two female figures represent Virtue and Vice. Vice, clad in more revealing orange robes is accompanied by Cupid who offers a posy of flowers up to him. She gestures towards an easy path to a beckoning sunny valley below. Whilst Virtue, chastely dressed in white, points to the difficult path, a steep rocky ascent. Hercules looks towards Virtue knowing which he should choose. The moral theme of this allegorical picture is derived from the Greek philosopher, Prodicus, a friend of Socrates and Plato, and told in Xenophon’s Memorabilia (circa 430-354 BC). The presence of the snake on the ground has multiple references. Hercules overcame snakes more than once in his life; it is an attribute of Minerva, the goddess of Wisdom symbolising prudence; and an evil serpent. This is possibly the picture that once belonged to the architect François Blondel (1617–86). It was bought by Henry II Hoare at the posthumous sale of the magnificent builder, collector, and patron, the 1st Duke of Chandos, in 1747.

Oil painting on canvas, Choice of Hercules by Nicholas Poussin (Les Andelays, Normandy 1594 - Rome 1665), circa 1636-37. Hercules, a demi-god known for his physical strength, young, naked, beardless, and crowned with a wreath of laurel, stands in a rocky landscape in front of a tree between two female figures, or goddesses, representing Vice and Virtue; Kakia and Aretê. He has stopped at a fork in the road to contemplate his future life. He rests his left hand on his club, and his lion skin over his right arm, and looks towards the figure of Virtue who stands on the left, chastely dressed in white and pointing upwards to a rock of extreme and difficult ascent, with a snake ramping on Virtue's (along with the laurel, an attribute of Prudence) path.Yet he would have the opportunity to face each adversity with courage and self-discipline, and of showing wisdom and justice despite great danger. On the right stands Vice clad in more revealing orange silk robes and accompanied by Cupid who offers a posy of flowers up to Hercules. Vice gestures with her left hand, pointing out an easy, pleasurable path to happiness with an idyllic valley below which lies behind them on the right. Needless to say Hercules chooses the correct path to eventual glory as nothing that is really good and admirable is granted without some effort and application.