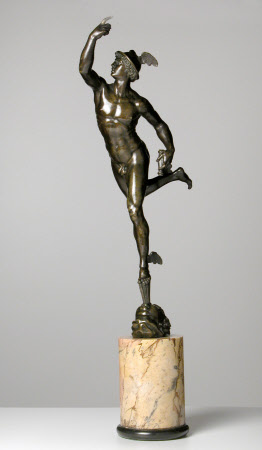 Bronze on giallo marble base

Bronze, on giallo marble cylinder with black base, Mercury, after Giambologna (Douai 1529 - Florence 1608), 18th century. Mercury, messenger of the gods, lightly balances his left foot on a puff of wind blown from the mouth of a zephyr whilst pointing his right index finger up to the heavens. He is shown with the traditional attribute of a winged helmet and boots but the caduceus has broken off. After the Bargello Mercury.

Mercury is the most celebrated and replicated of Giambologna's bronze sculptures, appearing in various iterations throughout the sculptor's lifetime and continually reproduced and adapted since. The first design is preserved in a bronze cast from a working model in the Museo Civico, Bologna, produced to crown a column in the University of Bologna. That project lapsed but the model was revived in 1564 for a new commission from Cosimo I de' Medici: a large statuette of Mercury presented as a diplomatic gift to the Holy Roman Emperor Maximillian II, whose sister Joanna was to be married to Cosimo's son Francesco. Maximilian venerated Mercury as a personal icon and Giambologna appears to have interpreted Leone Leoni's 1551 medal of the Emperor for his composition (see British Museum, London, G3,GerM.8). The whereabouts of that commission, a large statuette said to be the size of a 15-year-old-boy, are unknown, however a smaller statuette of Mercury by Giambologna dated 1585 does exist in the Viennese imperial collection: it is some 62.7 cm high and a rare example of a signed work, bearing the initials 'I.B' on Mercury's hat (Kunsthistorisches Museum Wien, Kunstkammer, 5898). That statuette is closer to a third, earlier Mercury, cast before 1579 for Ottavio Farnese, in the Museo e Gallerie Nazionali di Capodimonte, Naples, which is 57 cm high (inv.10784). A fourth design, in the Museo Nazionalle del Bargello, was cast in 1580 and accords with the life-size scale of Maximillian's Mercury, but was certainly executed for the Villa Medici in Rome on the orders of Cardinal Ferdinando I de' Medici (see photograph NT 96691). The innovation of the Bargello Mercury is the introduction of a bronze zephyr's head puffing a jet of wind vertically to support Mercury's foot. It was the model for a later 1598 bronze measuring 180 centimeters in The Louvre (Duc de Brissac collection, M.R. 3271). The Stourhead statuette of Mercury, cast in the 18th century, is a reduction of the Bargello type. Further sources for Giambologna's Mercury are Verrocchio's Cupid and a Dolphin commissioned for the Medici Chapel at Careggi (now in the Palazzo Vecchio, Florence), Giovanni Rustici's Mercury taking flight, a statuette commissioned in 1515 by Cardinal Giulio de' Medici, for the Palazzo Medici, Florence (Fitzwilliam Museum, Cambridge, M.2-1997), and the statuette of Mercury in one of the niches of Benvenuto Cellini's Perseus with the Head of Medusa (1545-54) commissioned by Cosimo I for Piazza della Signoria, Florence. Alice Rylance-Watson January 2019