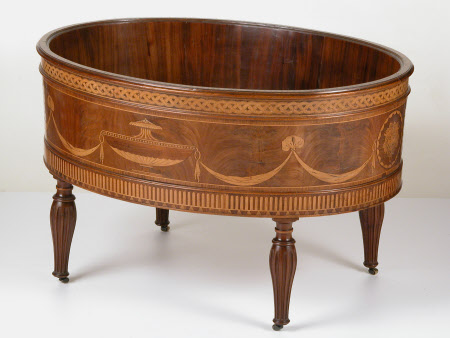 A holly inlaid mahogany and amaranth wine cooler, English, circa 1780. Of oval open form, the top edge inlaid with a repeating circular design with moulded lip above a narrow frieze inlaid with a celtic interlocking band and an urn below with swags of fabric and bows. The fluted inlaid apron raised on fluted turned tapered legs and brass castors. Liner missing. Literature: Jourdain, Apollo, July 1948 and Dictionary of English Furniture vol. III, p.373, fig.6, Exhibition: Adam Style Furniture, Kenwood 1964, no 53.

There is a group of furniture at Stourhead by an unknown maker or makers which date mostly from the last quarter of the 18th century and may well have been commissioned together. However it is unclear whether any were destined originally for Stourhead. It seems quite likely that they all had some connection to the Hoare family but as to whom and where they were commissioned is difficult to ascertain. There are two main candidates for the wine cooler, the most obvious being Thomas Chippendale the Younger who worked extensively at Stourhead and whose design features appear in the decoration. The inlaid fluted frieze for example is present on a pair of side tables (NT 731572). The other possibility is John Linnell who's work at this time was comparable and who also had a strong connection with the Hoare family. Unfortunately there is no documentary evidence to support an attribution to either of these makers, research is ongoing. James Weedon (February 2018)