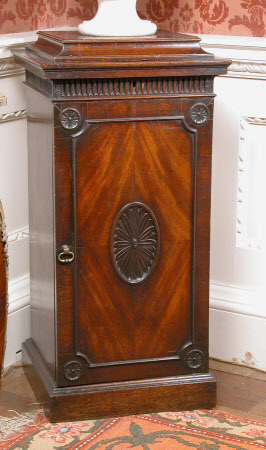 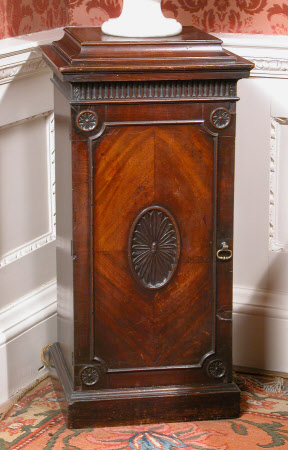 A pair of mahogany dining room pedestals, attributed to Chippendale, Haig and Co.(fl.1771-1779) London, circa 1775. Each with a stepped moulded cornice and fluted frieze above a paneled cupboard door centred by an oval patera and with circular paterae to the four corners, raised on a plinth base. One pedestal with a hinged top enclosing a recess and fitted with two drawers and a cupboard door, the lock with an S scroll key hole. The other fitted as a plate warmer with a zinc lined interior, originally fitted with two shelves, the zinc lining in poor condition.

Probably the pedestals inventoried in the Dining Room at Wavendon, c.1841 'Mahogany Pedestal hot closet and ditto cooler'. Brought to Stourhead in 1895 and recorded in the Saloon in the 1908 Stourhead inventory. Pedestals were usually made to flank a sideboard or serving table but there is no record of such a suite in the Hoare inventories. Dodd and Wood's article for Furniture History 2011 'The 'Weeping Women' commode and other orphaned furniture at Stourhead..' groups these pedestals with several other items of furniture in the Stourhead collection which do not have a direct paper trail but are certainly connected to the Hoare family and the Chippendale workshops. Almost exclusively, Chippendale fitted much of this cabinet furniture with back spring locks that had S-shaped keyholes, keys and often commensurate S-shaped escutcheons. A pair of pedestals at Paxton, Berwickshire bear very similar details and are attributed to the Chippendale workshops, circa 1776. A very similar pair of pedestals were sold Christie's New York 21st October 2014 lot 110. Provenance: The Shafto Family, Bavington Hall, Northumberland. James Weedon (March 2018)

Probably the pedestals inventoried in the Dining Room at Wavendon, c.1841 'Mahogany Pedestal hot closet and ditto cooler'. Brought to Stourhead in 1895 and recorded in the Saloon in the 1908 Stourhead inventory. Given to the National Trust along with Stourhead House, its grounds, and the rest of the contents by Sir Henry Hugh Arthur Hoare, 6th Bt (1865 – 1947) in 1946.