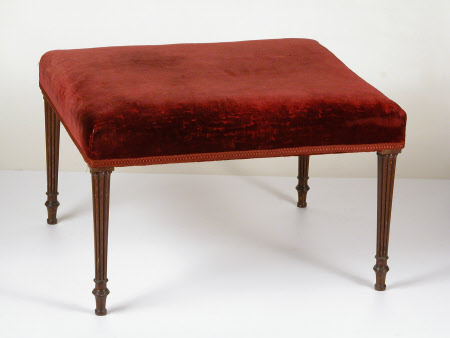 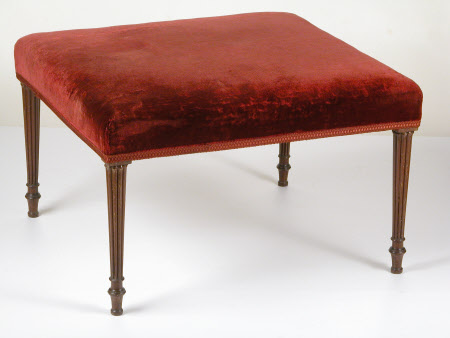 A pair of mahogany and upholstered stools, attributed to Haig and Chippendale (1779-1796) London circa 1780. The later upholstered over stuffed seat raised on flared reeded turned tapered legs with collars to the foot.

The design of the leg on these stools is closely associated with the Chippendale workshops and appears on many examples know to be by the firm. A sofa sold Christie's New York 16th April 2002, lot 290 and two sofas owned by the Paxton Trust all show a similar design. The long association with Chippendale and the Hoare family back up the attribution but no bills specifically linking these stools with the Hoare's exist.The Hoare family’s patronage of the Chippendale cabinet making practice can be traced back to the 1760s with the earliest connection being through Richard Hoare of Boreham (1739-1778). Chippendale the Younger (1749-1822) worked with his father Thomas Chippendale (1718-1779) for many years before the latter died. Much of the work he produced in the 1780s and 1790s continued the styles and techniques associated with the Chippendale firm. During these years he was completing or continuing commissions that the firm had been involved with including Harewood house, Nostell Priory, and Burton Constable, amongst others. James Weedon (February 2018)