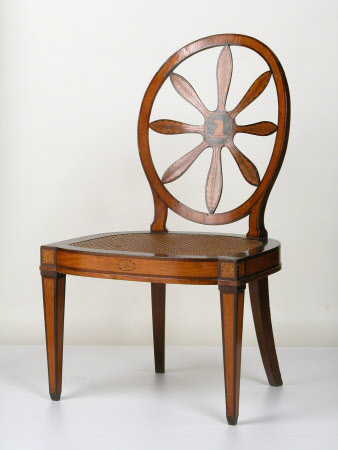 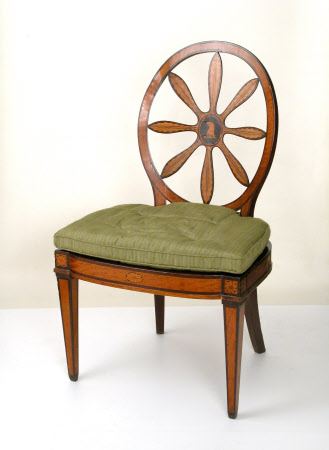 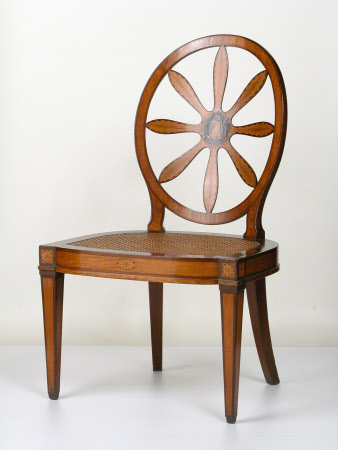 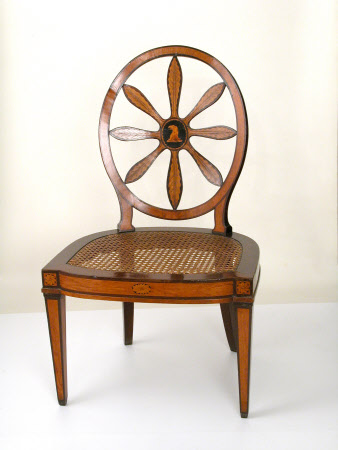 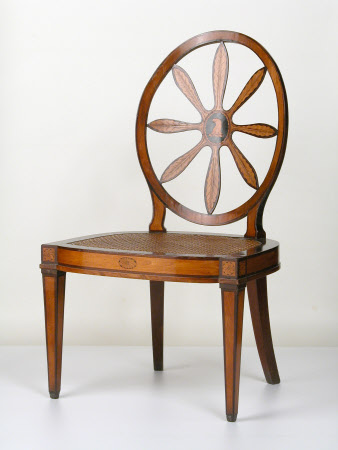 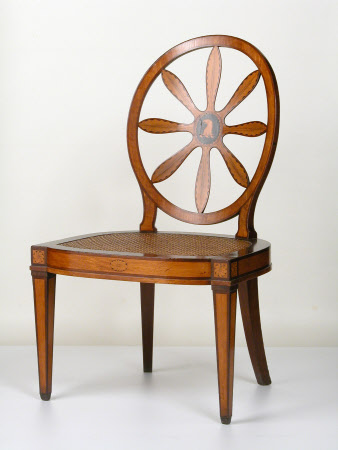 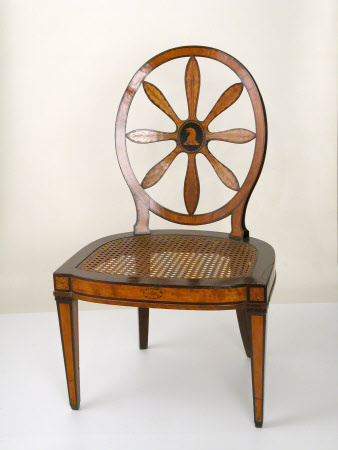 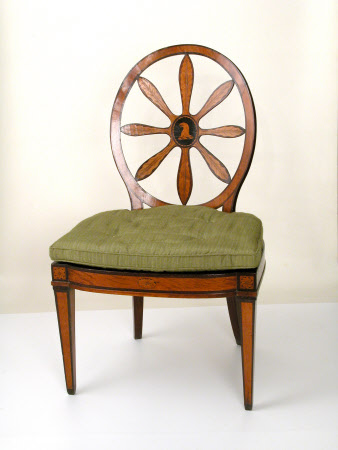 A set of eight inlaid satinwood and mahogany cane seated 'star back' chairs, attributed to Thomas Chippendale (1718-1779), Chippendale, Haig & Co. (fl. 1771 - 1779) or Thomas Chippendale Junior (1749-1822), London, circa 1775. The back with eight spokes, each inlaid with a feather and centred by an eagle's head within an oval bowed back frame, the caned seat raised on square section tapered legs headed by flower head paterae. Originally with castors and originally with arms. Later loose seat cushions.

Originally a set of ten, these chairs were inventoried at Wavendon House, c.1841, in the salon, '10 circular back mahogany chairs inlaid with satinwood, cane bottoms Spanish Leather Cushions'. Again at Wavedon, 1852, in the Dining Room, '10 satin wood and mahogany inlaid chairs with cane seats and cushions in leather' and in 1895, apparently nine chairs. The chairs were brought to Stourhead in 1895 and then eight chairs were documented there in 1908 in the Central Hall 'Eight rosewood inlaid satinwood Sheraton chairs, with wide 22'' seats, caned, with oval perforated leaf shaped octagonal backs, with crest in centre.' Dudley Dodd and Lucy Wood attribute the chairs to the Chippendale workshops in their article for FHS (2011) 'The 'Weeping Women' commode and other orphaned furniture at Stourhead by the Chippendales, senior and Junior. Their attribution is on stylistic and constructional grounds. The design is closely comparable to the painted 'star back' chairs at Paxton, supplied by Chippendale Senior in 1774. The single headed eagle is the Hoare family crest however it is not known which member of the family commissioned the chairs, nor for which house. See: Gilbert, Christopher 'The life and work of Thomas Chippendale' Christie's London 1978 Vol. 1 pp.273-275 & Vol. 2 pg.100 James Weedon (March 2018)

Almost certainly made by the Chippendale workshops for the Hoare family, originally a set of ten armchairs. Inventoried at Wavendon House c. 1841. Arrived at Stourhead in 1895.The house and contents given to the National Trust in 1946 by Sir Henry Hoare (d.1947).

Dodd & Wood 2011, Dudley Dodd & Lucy Wood, 'The Weeping Women commode and other Orphaned Furniture by the Chippendales at Stourhead', in Furniture History XLVII (2011)