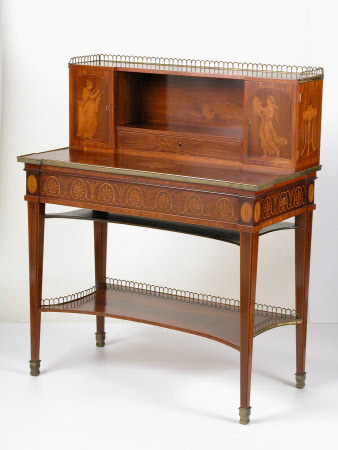 A marquetry inlaid rosewood and tulipwood cross banded Bonheur du jour or writing desk, attributed to John Linnell (London, 1729-1798) & Christopher Fuhrlohg (Sweden, 1737-after 1787) London, circa 1780. The top section with a brass gallery and a pair of cupboard doors inlaid with two muses; Erato and Terpsichore. Each of the doors opening to reveal two removable drawer compartments, each with two drawers allowing the cupboards to be used as 'pigeon-holes'. These flank a recess and a further drawer to the centre. The lower section with a rectangular top inlaid with writing paper and laurel above a frieze drawer inlaid with anthemions and with a later shelf stretcher below, raised on square section tapered legs headed by oval paterae and joined by a further brass galleried stretcher, brass castors.

This piece represents the combined work of John Linnell and Paris trained, Swedish cabinet maker Christopher Fuhrlohg. The cabinet could have been commissioned by Sir Richard Colt Hoare for his wife Hester (d.1783). More likely is his father Sir Richard Hoare (1735-87) 1st Baronet, of Barn Elms, Surrey who was a client of the Linnell firm. His name appears on three of the Linnell workshop drawings dated 1776, 1779, and 1780. The desk may have been made for his wife Francis (d.1800) at the Barn Elms address or St. James' Square, London. Fuhrlohg joined Linnell’s workshop c.1767 from Paris and worked there until c.1773 when he set up his own business in Tottenham Court Road. Comparisons to the inlaid panels can be drawn from a piano case dated 1775 in the Lady Lever Art Gallery which is attributed to Fuhrlohg. Lucy Wood's article 'A Bonheur du Jour at Stourhead: The Work of John Linnell and Christoper Fuhrlohg' Furniture History Vol.43 (2007) pp.55-68 explains that the two doors were made as separate panels seemingly before the rest of the desk and were incorporated into the design by Linnell. James Weedon (March 2018)

Probably made in the Linnell workshops circa 1780 and possibly made for Sir Richard Hoare (1735-87) 1st Baronet of Barn Elms Surrey or for his London house in St. James' Square. Transferred by descent to Stourhead. Given to the National Trust along with Stourhead House, its grounds, and the rest of the contents by Sir Henry Hugh Arthur Hoare, 6th Bt (1865 – 1947) in 1946.