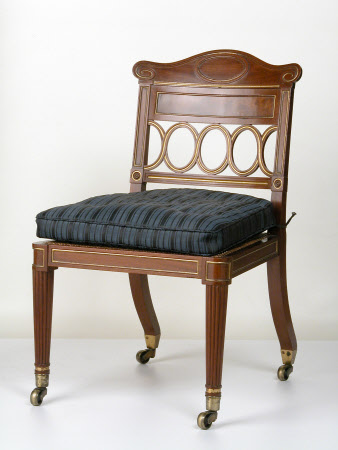 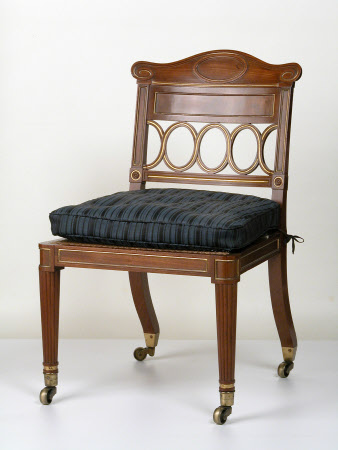 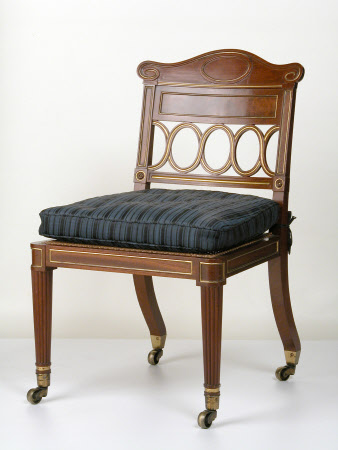 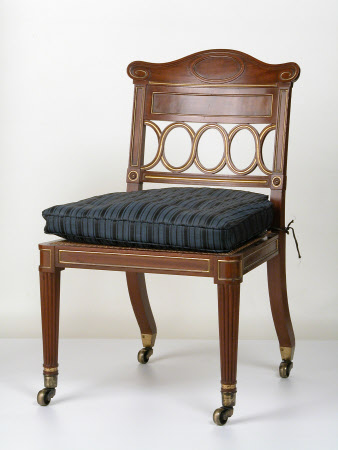 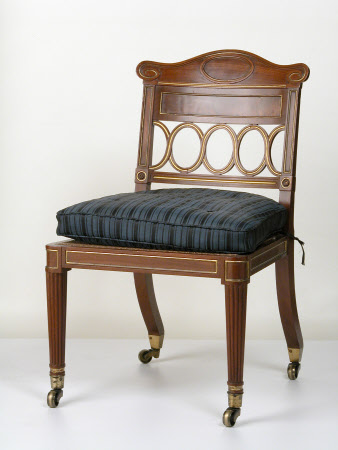 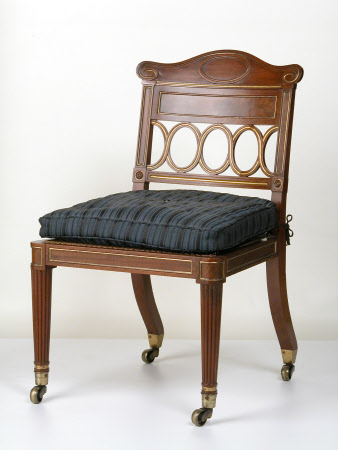 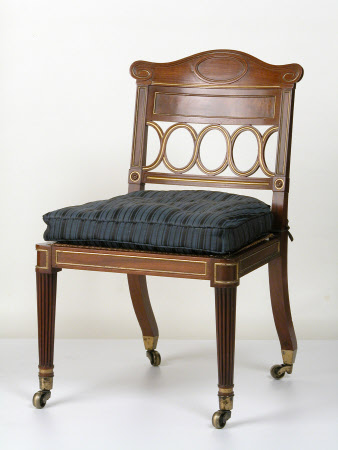 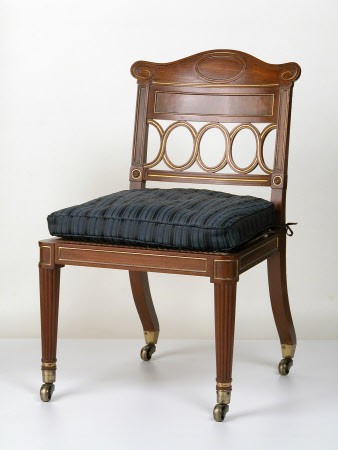 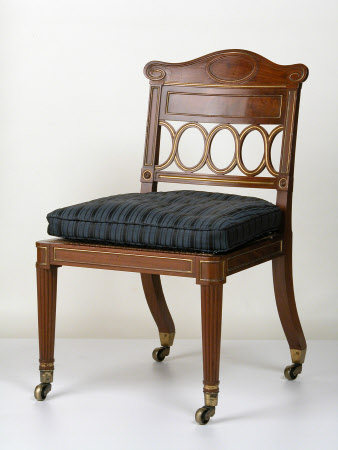 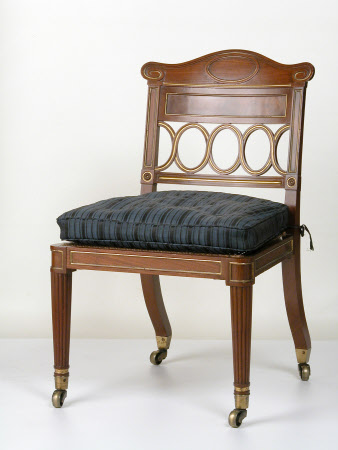 A set of ten mahogany, parcel gilt and cane seat side chairs, by Thomas Chippendale the Younger (1749-1822) London, 1812. Commissioned for the Music Room at Stourhead by Sir Richard Colt Hoare. The double scroll carved shaped top rail with an oval detail above a back with a top panel and moulded pierced oval guilloche design below within a moulded frame. The caned seat raised on reeded turned tapered front legs and splayed square section back legs, all on brass socket castors and with later seat cushions.

Chippendale's account dated 15th August 1812 reads '10 Chairs of fine Spanish Mahy with hollow panelld backs part carved with scrowls and bands, the seat rails panell, and quilled term feet cand seats and finished in matt gold £45-10-' and '10 Bordered Hair Cushions to ditto stuffd in fine canvas 14/-£7-' A pair of armchairs of similar design were supplied by Chippendale for the Music Room in 1816 (NT731581) Thomas Chippendale the Younger at Stourhead Sir Richard Colt Hoare employed Thomas Chippendale the Younger (1749-1822) from 1795 to 1820 to supply furniture and furnishings for Stourhead in Wiltshire. The accounts submitted for his work are the largest known archive relating to Chippendale’s work. Out of the 163 pieces of furniture described in the accounts, 103 are still in the house, mostly in the rooms for which they were made. There was a fire in 1902 which destroyed the central part of Stourhead but fortunately most of the pictures and furniture from the ground floor were saved, the majority of the contents of the upper floors were destroyed. Chippendale the Younger worked with his father Thomas Chippendale (1718-1779) for many years before the latter died. Much of the work he produced in the 1780s and 1790s continued the styles and techniques associated with the Chippendale firm. During these years he was completing or continuing commissions that the firm had been involved with including Harewood house, Nostell Priory, and Burton Constable amongst others. The furniture supplied for Stourhead shows the continued high quality and attention to detail that was expected from the Chippendale workshops, linked with simplicity of decoration and clarity of line. For further discussion and extensive published research see: Goodison, Judith ‘The life and work of Thomas Chippendale Junior’ PWP 2017 Goodison, Judith ‘Thomas Chippendale the Younger at Stourhead’ Furniture History Society 2005 (Vol. 41) pp. 57-116 Gilbert, Christopher ‘The life and work of Thomas Chippendale’ London 1978 Vol.1 pp.235, 267 Beard, Geoffrey & Gilbert, Christopher ‘The Dictionary of English Furniture Makers, 1660-1840’ Furniture History Society 1986 pg.169 James Weedon (January 2018)

Commissioned for the Music Room at Stourhead in 1812 by Sir Richard Colt Hoare, made by Thomas Chippendale the Younger. London.