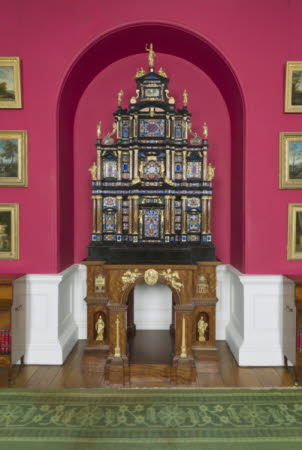 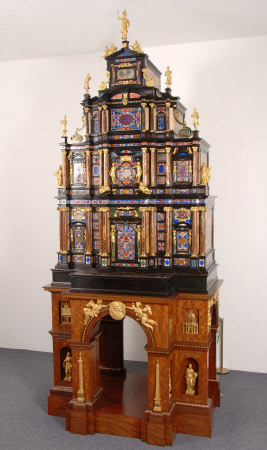 One of the most magnificent and elaborate items of furniture in the National Trust’s collections, this cabinet was once owned by Felice Peretti, Pope Sixtus V (b.1521; r.1585–90). Inside are 153 separate drawers for keeping secret items and precious personal collections, such as miniatures. The cabinet was designed to amaze and impress, so it was made with a range of rich materials, including gilt bronze, ebony, alabaster and a vast number of different hardstones, semi-precious materials and jewels, such as crystal, garnet, jasper, lapis lazuli, amethyst and mother-of-pearl. The exuberance of the design, which is modelled like a church façade, was characteristic of baroque papal taste, and it was probably commissioned by the pope c.1585 for display at his private palace in Rome. The cabinet was sold around 1740 by a Roman convent and purchased by the banker Henry Hoare II (1705–85) during a grand tour and displayed at his house at Stourhead in Wiltshire.

An ebony, gilt bronze and pietre dure cabinet, known as ‘The Pope’s Cabinet’, made in Rome, circa 1585, raised on a parcel-gilt mahogany stand (NT 731576), probably designed by either Henry Flitcroft (1697-1769) or John Michael Rysbrack (1694-1770), and made circa 1742-3 by ‘Mr James’, with carvings by John Boson (c.1696-1743). The cabinet architectural in form, of ebony inlaid with an abundant variety of pietre dure (hardstones), jewels, millefiori glass and antique intaglios, and mounted to both the front and sides with gilt bronze statuary and columns with gilt bronze capitals. Many of the stone inlays set into a border of silver. The facade of four graduated decorated ‘storeys’, comprising an ‘attic’ storey and three lower storeys each representing a different classical order – Composite, Corinthian and Ionic - and each centring on a ‘prospect’ door. The whole enclosing numerous ebony-veneered small drawers, and secret drawers, of various sizes, some still fitted with their original tassels of yellow, green and red silk thread, others with original bone handles. All raised on a breakfront plinth of ebony, veneered with partridge wood and with inlaid lines and moulded edges. Two of the carved figures – St. Peter & St. Paul - to the Corinthian storey added later, circa 1743, and almost certainly by John Boson (c. 1696-1743).

The Pope’s Cabinet (also known as The Sixtus Cabinet) – the most significant sixteenth-century example of Roman pietre dure cabinet-making in Britain – was made around 1585, probably for Pope Sixtus V Peretti (1521-1590; reigned 1585-1590), the so-called ‘Iron’ Pope, who beautified Rome with fountains, aqueducts and obelisks. Luxury cabinets such as this were made to display the most spectacular and costly products in ‘pietre dure’ (hard stones) inlay – an immensely time-consuming technique of marquetry using different colour pieces of highly polished marble, porphyry, jasper and other rich materials, set into silver borders. The cabinets were intended to contain and secure, though not to display, collections of gems, cameos, medals and other precious objects: this cabinet still contains seventy-three surviving Italian and Spanish portrait miniatures. According to Simon Swynfen Jervis and Dudley Dodd, historians of the cabinet, Pope Sixtus ‘is notorious for having in 1588 ordered the demolition of the Septizonium, a famous ornamental façade with three orders erected by the Emperor Severus in AD 204 at the foot of the Palatine Hill, and appropriated its materials, including rare marbles, for his own building projects, among them the Cappella Sistina in Santa Maria Maggiore’. It may be that some of the vast array of rare stones and marbles incorporated in this cabinet came from this, or a similar, source. Conservation carried out between 2006 and 2008 found that two of the amethysts to the lowest ‘order’ of the cabinet were drilled for wire, suggesting that they had once been destined for use in the jewellery trade. The same phase of work confirmed that an organ was once housed in the cabinet, with a keyboard set in the front. The cabinet was later purchased by Henry Hoare II (1705-85) – also known as ‘The Magnificent’ – during his Grand Tour of 1739-41. The vendor was reputedly a Roman convent to which it had been given by a nun, the last representative of the family of Pope Sixtus V. It first arrived at Stourhead in 1742 and caused a stir almost immediately. Walpole described it as ‘magnificent’; for Mrs Lybbe Powys it was the ‘so-much-talked-of-cabinet’; and William Beckford of Fonthill, not an admirer of Stourhead, wrote ecstatically, ‘Sixtus the Fifth’s cabinet is divine, I know – the bronzes are of extreme delicacy and elegance, and those lovely agates, alabasters and cornelians, mingled with the glittering mother-of-pearl, produce a rich effect, agreeable and grateful to the eye. It will be difficult to surpass, but we must try...’ The 1655 inventory of the Perettis’ Palazzo Felice in Rome describes the original stand as supported by gilt figures, in typically Roman style. In 1713, it was described as ‘a large pedestal of black and gilt wood’. In 1742-3, Henry Hoare II commissioned a new mahogany stand from the as yet unidentified cabinet-maker ‘Mr James’. It took the form of a triumphal arch, set with a crisply carved gilded portrait of Sixtus V, upheld by angels, after a silver medal (1585-6) by Lorenzo Fragni (1538-1619) and carved reliefs of the Pope’s Roman monuments by the carver John Boson (c. 1695-1743). Henry Hoare II clearly believed, and set great store by, the cabinet’s papal provenance. The cabinet is still displayed in a round-headed niche in the eponymous Cabinet Room at Stourhead, which was originally deeper and surmounted in 1802-3 by a giltwood papal tiara and other ‘cornice’ work by Thomas Chippendale Jr (1749-1823), who also provided a blue silk velvet gold-trimmed curtain, which was drawn up to reveal the cabinet. Partly concealed by this curtain, the cabinet would have gleamed in the semi-darkness like some great shrouded reliquary. During the 1902 Stourhead fire, the cabinet and stand were carried to safety, but the gilt cornice was unfortunately lost.