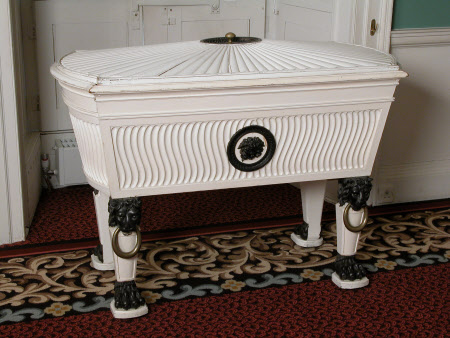 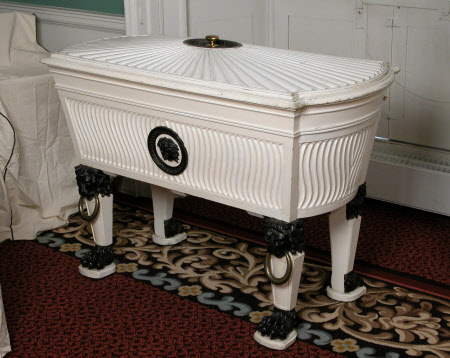 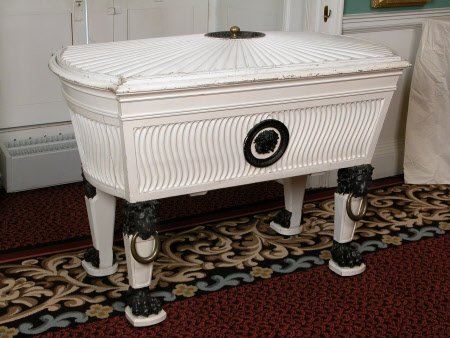 A set of three monochrome painted deal and brass mounted sarcophagi, by Thomas Chippendale the Younger (1449-1822) London 1802. Commissioned for the window recesses in the Picture Gallery at Stourhead by Sir Richard Colt Hoare.The panelled lid with a ribbed fan design radiating from a central oval floral paterae and later brass handle, above a tapered body with waved fluted decoration and centred by an applied roundel with a mask of Medusa. Raised on four lion monopodia with brass rings in the lion's mouths and small plinth bases to each foot, brass castors.Painted decoration refreshed.One sarcophagus retains its original tin liner, the other two are missing.

Chippendale's account dated 16th October 1802 lists them as '3 Sarcophagus's for the recesses of windows with tin linings carved and painted white and part bronzed A Medusa's head in the centre, the feet ornamented with carved lions heads and paws with brass rings and to stand on strong castors. £69-' According to the accounts Chippendale supplied nine similar sarcophagi to Stourhead, one specified for the Cabinet Room, the two ante-rooms and two for the library. There are also another pair of similar design but which do not seem to appear in any of the accounts, they are almost certainly from the Chippendale workshops but differ from this set. Because the sarcophagi were supplied with tin liners it is quite probable that their intended function was as jardinières rather than for cooling wine as mentioned in some texts. Wine coolers were usually lined with zinc in the 19th century, replacing the heavier and more cumbersome lead. It would be also be unusual to store wine in all of the main rooms of a house and the size of the receptacles are too large for wine bottles. Thomas Chippendale the Younger at Stourhead Sir Richard Colt Hoare employed Thomas Chippendale the Younger from 1795 to 1822 to supply furniture and furnishings for Stourhead in Wiltshire. The accounts submitted for his work are the largest known archive relating to Chippendale’s work. Out of the 163 pieces of furniture described in the accounts, 103 are still in the house, mostly in the rooms for which they were made. There was a fire in 1902 which destroyed the central part of Stourhead but fortunately most of the pictures and furniture from the ground floor were saved, the majority of the contents of the upper floors were destroyed. Chippendale the Younger worked with his father Thomas Chippendale (1718-1779) for many years before the latter died. Much of the work he produced in the 1780s and 1790s continued the styles and techniques associated with the Chippendale firm. During these years he was completing or continuing commissions that the firm had been involved with including Harewood House, Nostell Priory, and Burton Constable, amongst others. The furniture supplied for Stourhead shows the continued high quality and attention to detail that was expected from the Chippendale workshops, linked with simplicity of decoration and clarity of line. For further discussion and extensive published research see: Goodison, Judith ‘The life and work of Thomas Chippendale Junior’ PWP 2017 Goodison, Judith ‘Thomas Chippendale the Younger at Stourhead’ Furniture History Society 2005 (Vol. 41) pp. 57-116 Gilbert, Christopher ‘The life and work of Thomas Chippendale’ London 1978 Vol.1 pp.235, 267 Beard, Geoffrey & Gilbert, Christopher ‘The Dictionary of English Furniture Makers, 1660-1840’ Furniture History Society 1986 pg.169 James Weedon (January 2018)