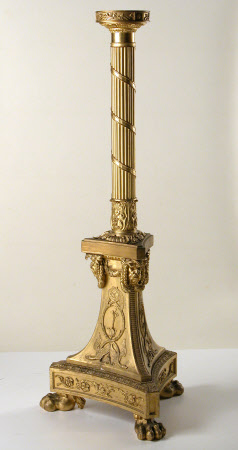 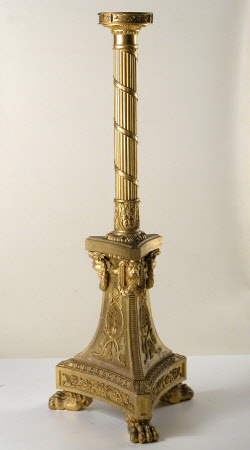 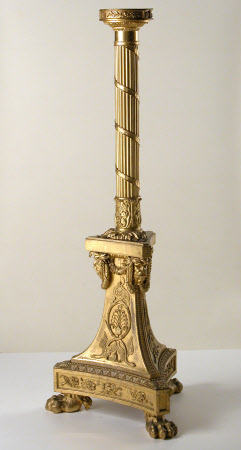 Three gilt wood and gilt gesso pedestals, one certainly made by Thomas Chippendale the Younger (1749-1822), London 1802, commissioned for the Picture Gallery at Stourhead by Sir Richard Colt Hoare. The other two certainly enhanced and improved by Chippendale's workshop but probably not made by them. The circular top with paneled frieze with applied floral decoration and leaf collar, above a reeded column with twisted ribbon, the spreading triform plinth with applied Greek motifs incorporating winged serpents and male masks carved to the corners and a paneled plinth below with further applied decoration, raised on lions paw feet. Originally with a four light candelabrum, now missing.

It is unlikely that Chippendale made all three of the pedestals. His bill dated October 16th 1802 reads 'A rich candelabrum for four lights to match your own with a variety of carved ornamental work with goats heads and lions feet the pillar reeded. Highly finished in Burnished gold £37-10-' and 'Reeding the pillars of your 2 candelabrums adding ribbands to ditto and finishing in burnished gold £3-' and 'silk thread tape and time making 3 yellow printed cotton cases for the three candelabrums £1-11-' These pedestals match the description on the accounts for these candelabra, except for the fact that the heads are not those of goats but of men. Some other entries also show inaccuracies in their descriptive detail but it is possible that the goat's heads were present on the four light candelabra which are no longer present. It is thought that Colt Hoare may have purchased the two pedestals from Fonthill Abbey, Wiltshire, the home of William Beckford and built by the architect James Wyatt between 1796-1813 but there is no evidence to support this. Intrestingly there are a pair of giltwood torchères in The Gerstenfeld Collection, catalogue no.89 by Thomas Chippendale Snr. dated circa 1773 which were supplied to Sir Penistone Lamb, 1st Viscount Melbourne (1748-1819) which have a similar triform plinth with masks, swags and gilt gesso decoration. See: Lennox-Boyd, Edward (Ed.) 'Masterpieces of English Furniture, The Gerstenfeld Collection' Christies 1998 pp. 96-99 Thomas Chippendale the Younger at Stourhead Sir Richard Colt Hoare employed Thomas Chippendale the Younger from 1795 to 1822 to supply furniture and furnishings for Stourhead in Wiltshire. The accounts submitted for his work are the largest known archive relating to Chippendale’s work. Out of the 163 pieces of furniture described in the accounts, 103 are still in the house, mostly in the rooms for which they were made. There was a fire in 1902 which destroyed the central part of Stourhead but fortunately most of the pictures and furniture from the ground floor were saved, the majority of the contents of the upper floors were destroyed. Chippendale the Younger worked with his father Thomas Chippendale (1718-1779) for many years before the latter died. Much of the work he produced in the 1780s and 1790s continued the styles and techniques associated with the Chippendale firm. During these years he was completing or continuing commissions that the firm had been involved with including Harewood House, Nostell Priory, and Burton Constable, amongst others.The furniture supplied for Stourhead shows the continued high quality and attention to detail that was expected from the Chippendale workshops, linked with simplicity of decoration and clarity of line. For further discussion and extensive published research see: Goodison, Judith ‘The life and work of Thomas Chippendale Junior’ PWP 2017 Goodison, Judith ‘Thomas Chippendale the Younger at Stourhead’ Furniture History Society 2005 (Vol. 41) pp. 57-116 Gilbert, Christopher ‘The life and work of Thomas Chippendale’ London 1978 Vol.1 pp.235, 267 Beard, Geoffrey & Gilbert, Christopher ‘The Dictionary of English Furniture Makers, 1660-1840’ Furniture History Society 1986 pg.169 Lennox-Boyd, Edward (Ed.) 'Masterpieces of English Furniture, The Gerstenfeld Collection' Christies 1998 pp. 96-99 James Weedon (January 2018)